Diocesan-produced video on Mass changes can be seen online 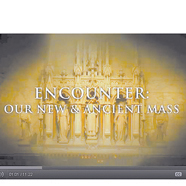 Photo Caption: A screenshot of the diocesan video that was played at all Masses in early October anticipating the new English translation of the Roman Missal that goes into effect Nov. 27.

Catholics across central Illinois have another way to study and reflect on the new English translation of the Roman Missal and they can access it from their computers, smartphones and tablets.

“Encounter: Our New and Ancient Mass,” the film produced by the Diocese of Peoria and shown at all the Masses the weekend of Oct. 8-9, now may be viewed and/or downloaded from the Diocese of Peoria’s YouTube page, CDOPVids. It features Bishop Daniel R. Jenky, CSC, and Msgr. Stanley Deptula, director of the diocesan Office of Divine Worship, who talk about key changes in the Mass texts and how they add beauty and meaning to the liturgy.

Filming took place not only at St. Mary’s Cathedral but at Sacred Heart Church and St. Bernard’s Church in Peoria, and Nazareth Retreat Center in rural Henry. That was intentional, according to Msgr. Deptula, who is executive producer of “Encounter.”

“We do so much at the cathedral and obviously the cathedral is the mother church of our diocese, but both the bishop and I wanted to convey that very local aspect of this moment of reform,” he said.

The film also includes “man on the street” interviews with people attending the daily 12:05 p.m. Mass at Sacred Heart, which draws business people from downtown offices as well as parishioners.

Those who listen carefully to the music that is being sung in the background will have an opportunity to become more familiar with the “Mass of Wisdom” by Steven R. Janco. Bishop Jenky has requested that pastoral musicians teach this setting and the chant setting in the new missal to their parishioners so that there will be a common musical “language” for diocesan and regional liturgies.

“ABOVE AND BEYOND”
“Encounter: Our New and Ancient Mass” was written and produced by Converse Marketing Inc., which also was responsible for the 2010 documentary “Archbishop Fulton J. Sheen: Servant of All.” The director was Jason Salyers.

“They’ve done just excellent work for different diocesan programs and we were very happy to work with them on this,” said Msgr. Deptula.

“One of the nice things about the DVD and the whole process was the level of collaboration within the curia, among the bishop’s leaders,” he said, noting that the diocesan Office of Catholic Schools and Office of Catechetics worked with the Office of Divine Worship. These are the same offices that produced a study guide, PowerPoint presentation and bulletin inserts about the Mass that are being used in parishes, schools and faith formation programs around the Diocese of Peoria.

“I also had a small committee of priests and other professionals, and there was a lot of brainstorming that went into what should be covered in this DVD,” he explained. “It went through many different manifestations.”

Msgr. Deptula said that while there are many fine programs available to prepare people to welcome the new missal, he is not aware of any other dioceses that have produced their own film as an educational tool.

“I like to think this is a step above and beyond,” he said.

In the film, Bishop Jenky shares his joy about the new translation of the Mass texts.

“I would hope that a year from now we will be praying better by savoring those words taken right from the lips of our Lord, those words taken from the holy Gospels, savoring the ancient prayers of our faith from the Latin language . . . so that when we come together for Mass, we will be able to use these words intentionally,” he said, and “intensify our worship of God.”