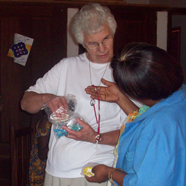 Photo Caption: Sister Anne Germaine Picard, SMP, offers rosaries to the teachers in on of the schools she visited in Cameroon.

PRINCETON — The poor are real.

“The poor are no longer just a concept in my head, but in my heart,” said Sister Anne Germaine Picard, SMP, who left Princeton for three months to visit the members of her religious community in Cameroon and minister by their side.

She said she was struck by the simplicity of the people and returned with the lesson that “I don’t need a lot of stuff to live. The people there live to survive.”

It’s a lesson she remembers every day, in the most basic ways.

“When I run the water and get warm water right away to wash dishes or take a shower — most of the places we were didn’t have that,” Sister Anne Germaine explained. The water pressure was very low in the African villages and warm water might not be available until the afternoon, if at all.

Even volunteering to do some ironing for the parish was a lesson in simplicity and flexibility, since there wasn’t always electricity when it was needed.

“If the other town had electricity you didn’t,” she said. “The resources just weren’t there or else the resources were very expensive. That’s what keeps the poor poor.”

MINISTRY OF PRESENCE
Traveling with Sister Anne Germaine was Sister Suzanne Stahl, assistant provincial of the Sisters of Mary of the Presentation. The community has had a presence in Cameroon since 1956.

One Sister from the United States served there for 14 years, but since her retirement the American Province has not been able to send someone full time, Sister Anne Germaine said. Currently there are 31 African Sisters of Mary of the Presentation ministering in six geographic regions of Cameroon and there are another 10 in formation.

“We went to show the support of the American Province of Sisters,” according to Sister Anne Germaine, who is the vocation director for the community.

While they were there, Sister Anne Germaine and Sister Suzanne taught English to the children in the schools, went to parish meetings, visited prisons where the Sisters minister, and helped to clean seven rooms in a maternity hospital. While washing the walls at the hospital they noticed the paint was peeling and with monetary assistance from the American Province of the Sisters of Mary of the Presentation they were able to buy enough paint to cover the walls in 10 rooms and part of the hospital.

French is the official language of the country, but the Baka people they interacted with had their own language. In those situations just being present to the people with love and responding to their needs communicated more than words could anyway, Sister Anne Germaine told The Catholic Post.

HELP NEEDED
What impressed the women religious from America was the power of prayer and the dedication of their African counterparts.

Not only do they pray twice a day and go to Mass, but every Sunday, from 6 to 7 p.m., each community gathers for adoration, which provides “a thread of prayer that keeps them bonded in mission.”

Sister Anne Germaine also found a connection between the African and American Sisters in the hour of eucharistic adoration they share before Mass on Thursday evenings. “When we went to church for adoration there I bonded myself with adoration here — even if there is a six-hour difference,” she said.

When they returned this summer, the American Sisters brought with them a desire to help the people they had left. One way of doing that is to replace the water pump at the maternity hospital in Salapoumbe, which is often out of water by noon.

Sister Anne Germaine said those who would like to make this dream a reality may send donations to Maryvale, 11550 River Road, Valley City, ND 58072.