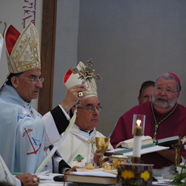 When the leader of the world’s 5.5 million Maronite Catholics visits your church not once but on consecutive weekends, what’s left for a Peoria pastor to say after a profound “thank you”?

“I wish you could come back every Sunday” was the sentiment expressed to Patriarch Bechara Rai by a grateful Chorbishop Faouzi Elia, pastor of St. Sharbel’s Maronite Catholic Church in Peoria at the conclusion of a Mass celebrated by the patriarch on Oct. 9.

“I come with my vicar general and brother bishops to assure you of our love and care for every one of you,” said Patriarch Rai, based in Lebanon and making his first pastoral visit to the United States this month following his election in March.

That visit, which continues in major cities through Oct. 25 and includes a meeting with U.N. Secretary-General Ban Ki-moon, actually began in Peoria on the previous weekend. Patriarch Rai, along with several other Maronite bishops, stopped here on their way to a four-day meeting in St. Louis to take part in a Mass of Thanksgiving celebrated at St. Sharbel’s Church by newly ordained Bishop Hanna Alwan, who has many family members in the Peoria parish.

Bishop Alwan, a member of the Congregation of Maronite Lebanese Missionaries elevated to the episcopacy Sept. 16 in Lebanon, will serve as Patriarch Rai’s auxiliary for juridical affairs.

St. Sharbel’s is the only Maronite Catholic parish located within the geographic region of the Diocese of Peoria and one of just 100 in the United States. Maronite Catholics are Roman Catholics of the Eastern tradition, with the pope as their universal head but governed by the patriarch, who is based in Bkerke, near Beirut in Lebanon.

SUPPORT CHRISTIANS IN HOLY LAND
On both weekends in Peoria, Patriarch Rai asked for prayers and support for Christians in Lebanon and throughout the Middle East.

“We need your help, your prayers to keep that presence alive,” Patriarch Rai said in addressing a packed St. Sharbel’s Church at the end of Mass on Oct. 2. Christians may be a small minority in the region, “but never look at us a minority,” the patriarch urged. “We are representing the universal church, and with the whole church are doing its work and witnessing to the reality of our Lord Jesus Christ.”

Acknowledging the political and religious divisions that continue to plague the region and weaken the Christian presence, Patriarch Rai said he is asking all Maronites to embrace his patriarchal motto, “Communion and Love,” as a path to peace.

“It’s important to go back to strengthening our relationship between us and God,” said Patriarch Rai. “When we live communion with God we practice communion with each other, witnessing through action, love and caring.”

Patriarch Rai spoke in both English and Arabic, with translation sometimes provided by his vicar general, Archbishop Paul El-Sayah. He noted that the Oct. 9 liturgy was celebrated on the 34th anniversary of the canonization of St. Sharbel, known as “the hermit of Lebanon” and who spent long hours in prayer and meditation.

“His example motivates us to calm down and hear the voice of God,” said the patriarch. “We live in a busy world.”

Bishop Daniel R. Jenky, CSC, was present in the sanctuary for the Oct. 9 Maronite liturgy at St. Sharbel’s and proclaimed the Gospel. Among those in attendance were U.S. Secretary of Transportation Ray LaHood, whose father helped establish St. Sharbel’s Parish in Peoria, and Antoine Chedid, Lebanon’s ambassador to the United States.

Many of Peoria’s Lebanese community have roots in the village of Itoo, and the patriarch and Bishop Alwan were guests of honor both weekends at receptions at the Itoo Hall in Peoria.

LEBANON A SIGN OF HOPE
In an interview with The Catholic Post prior to being guest of honor at a banquet on Saturday evening Oct. 8, Patriarch Rai noted that Lebanon’s political system of equally shared governance between Christians and Muslims offers an important, hope-filled “message to the world.”

“We’ve been living with Islam for hundreds of years,” the patriarch said through his interpreter. Noting Christian contributions to democracy, freedom, and human rights — “These were not imported from the west,” he reminded — he urged that Catholics ask their political representatives to safeguard Christians of the region and not “sacrifice them for economic or any other purposes.”

While Lebanon has thus far been only minimally impacted by the unrest in the region, Patriarch Rai is concerned that a conflict in neighboring Syria could escalate into a civil war. Minorities always “pay the price” in such conflicts, he said, pointing to Iraq, where nearly two-thirds of Christians have left in recent decades of war.