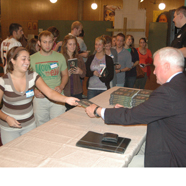 NORMAL — Chicago Bears’ senior director Patrick McCaskey was fielding questions about football and his Catholic faith as smoothly as Devin Hester returns punts until one from Father Peter Zorjan stopped him cold.

“Do you pray for the Packers, too?” asked Father Zorjan, chaplain of the John Paul II Catholic Newman Center at Illinois State University, which hosted McCaskey Sept. 29 for a presentation on his new book, “Sports and Faith: Stories of the Devoted and the Devout.”

After a pause, and a wry smile, McCaskey answered, “Yes, Father. We can learn from primitive cultures.”

McCaskey, a grandson of Bears’ pioneer owner and late football icon George Halas, showed his humorous side often during a presentation filled with excerpts from his book and reflections on his family and faith.

He credited his grandfather for establishing the Bears’ twin goals of winning championships and helping other people. “We are trying to extend his legacy,” said McCaskey, noting that many players go to Mass, chapel, and Bible study regularly.

He also recalled how Halas — who owned the Bears for 62 years until his death in 1983 — once famously said to an official “No man is completely worthless, you can always serve as a horrible example.” The worst thing McCaskey ever yelled at an official?

“Jesus died for your sins.”

But mostly McCaskey, a 36-year veteran of the Bears organization, shared uplifting tales of lives lived in obedience to God’s calling. He is chairman of Sports Faith International, an initiative that recognizes people who are successful in sports while leading exemplary lives. In his book, he speaks of inspirational players such as Brian Piccolo and Bill Wade and also profiles athletes and coaches who now serve the church, including as priests.