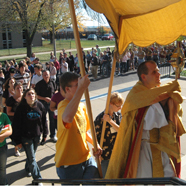 Photo Caption: Father Nathan Cromly, CSJ, carries the Blessed Sacrament into St. Mary’s Cathedral as teens from around the diocese taking part in a Diocesan Youth Rally on Oct. 8 follow in procession.

The band’s music had the young people repeatedly on their feet, hands in the air and joy on their faces. Moments later came the announcement that everyone was being offered an all-access, backstage pass to meet someone with beyond-superstar status.

“The invitation is a personal invitation. It has your name on it,” said Mary Bielski, a high-energy speaker at the Diocesan Youth Rally last Saturday at the Spalding Pastoral Center in Peoria.

And many in the crowd of teens from parishes around the diocese accepted the invitation, meeting Jesus throughout the day, including:

— In the witness of the presenters, including Bielski and Father Nathan Cromly, a member of the Community of St. John who outlined the reality of Jesus’ love and life and said “what matters to me more than anything else is that you meet him.”

— In the music and lyrics of Station 12, a newly formed praise band from St. Jude’s Parish in Peoria.

— In laughter as new friends were made through games and activities, and especially

— In the quiet of the sacrament of reconciliation, adoration before the Blessed Sacrament, a silent eucharistic procession to St. Mary’s Cathedral, and a Mass with Bishop Daniel R. Jenky, CSC.

GOD IS TRUE, LIVES CHANGE
Bielski, a Catholic youth minister from South Bend, Ind., cited iPhones, Facebook, Skype, and even “a Starbucks on ever corner” to show that people today have instant access to information and many desires. She challenged them to have passion to “have access to a God who is real and wants to transform our lives.”

“We don’t have to go to a concert,” she said. “God is here. But we have to go backstage” to encounter Jesus personally and form a relationship, said Bielski. The sacraments and devotions of the Catholic Church, she said, “all lead us to backstage.”

Father Nathan told the young people there are three ways to respond to the life of Jesus — say he was crazy, that he was a liar, or that he is truly the Son of God as he claimed.

Evidence against Jesus being crazy is that his teachings have influenced cultures throughout the centuries, said Father Nathan. And if he was a liar, “he didn’t get much out of it” except being beaten and put to death.

“Jesus is the only one who founded a religion to claim he was God,” said Father Nathan. “If God exists, my life has to change,” he added, urging the teens “don’t be afraid to be the saint you are called to be.”

The diocese-wide youth rally returned after a several-year hiatus under the leadership of Craig Dyke, newly appointed director of evangelization. More than 130 teens and dozens of youth leaders attended, including several members of the Community of St. John’s Eagle Eye Institute, who put on a skit and mingled with the teens.

“I have no doubt God has something amazing to say to you today,” said Sister Sarah. “Keep your heart and your mind open.”

Bishop Jenky told the young people at the closing Mass that “you build up my faith by your love for the Lord and your willingness to spend time together.”