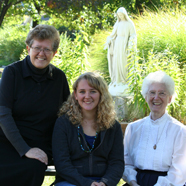 MACOMB — A new model of campus ministry is taking shape at the St. Francis of Assisi Catholic Newman Center here, but the mission to the young adults it serves remains the same as the day it was founded.

“I think what Newman can do is really be a presence for them and a witness that God is real and that their faith can be a part of their life,” said Sister Janice Keenan, OSF, the new director of the Newman Center, which is located between student housing and academic buildings on the campus of Western Illinois University.

“It gives them a sense of presence, that everyone that’s here is interested in them. There’s someone to listen to them and accept them where they are, but also able to give them some information and some structure and some challenges — a basis to go on with their life,” she told The Catholic Post during a recent visit.

Joining Sister Janice at St. Francis of Assisi is Sister Marion Lemon, OSF. She serves as a campus minister along with Megan Willis, who is beginning her second year at the Newman Center.

The chaplain is Father Tom Holloway, pastor of St. Bernard’s in Bushnell and St. Augustine’s in St. Augustine. Father William Keebler, administrator at St. Rose in Rushville, is the assistant chaplain.

“There hasn’t been a presence of women religious here before,” Father Holloway said, noting that it’s a real benefit to have a full-time presence at the Newman Center.

Calling them “pretty accomplished ministers in their own right,” he said Sister Janice and Sister Marion are “extraordinarily receptive to each individual person. This generation suffers a crisis of having someone’s attention. They offer a consistent, stable, loving presence.”

ONE OF EIGHT
Sister Janice and Sister Marion are Sisters of St. Francis of the Immaculate Conception, also known as the Heading Avenue Franciscans because their motherhouse is located on West Heading Avenue in West Peoria. It is the community’s practice to send at least two Sisters to any mission and that was part of the discernment process for accepting an invitation to minister at St. Francis of Assisi.

Another factor in their discernment was the commitment of Bishop Daniel R. Jenky, CSC, to Newman ministry. St. Francis of Assisi Catholic Newman Center in Macomb is one of eight centers for campus ministry in central Illinois and as a diocesan religious community, they wanted to assist if they could, Sister Janice said.

In order to make it possible for them to live at St. Francis of Assisi, the former priest’s apartment was enlarged by converting the garage into a second bedroom. Furniture from the motherhouse has enabled them to create a simple, cozy home for everyday living and visiting with guests.

The Sisters also brought with them experience in Catholic education, TEC and Cursillo. They knew they could live and work well together because they had served for a time as co-principals at St. Philomena’s School in Peoria.

Before taking up her new role, Sister Marion had worked at St. Joseph’s Home in Springfield for seven years.

Sister Janice comes to Macomb after nine years at St. John’s Catholic Newman Center at the University of Illinois in Urbana-Champaign. For four of those years she worked with Father Holloway, who was assistant chaplain.

FAITH IS NOT A SUBJECT
“We’re blessed to work with Father Tom,” Sister Janice said of their chaplain at St. Francis of Assisi Catholic Newman Center.

“Father Tom relates well to all ages, but he relates well in particular to that age group, which is searching and having their faith become real and taking ownership of that faith,” she said. “He’s a very prayerful, spiritual priest and I think he’s able to speak a language that they understand.”

Sister Marion said she likes the way he brings stories from the movies or a song into his homily — and the students do, too.

“They laugh because they know what he’s talking about or they nod their head,” she told The Post. “They know he’s talking to them.”

It’s important to make that connection now because it is a crucial time in the lives of these young adults, Father Holloway said.

“They’re in the process of discovering who they are, forming an identity,” he explained. “If they can be strongly rooted in the faith there is an 80 percent chance that this is who they will be for the rest of their life in some way. I’ve seen that borne out.”

“The bishop is so adamant about this ministry because whether we learned it in Catholic school or at home, you don’t graduate from your faith,” said Deacon Bob Sondag, diocesan director of Newman Ministry and vice chancellor of the Diocese of Peoria.

“It’s not a subject. The math book you close at the end of your senior year. We can’t let them do that with their faith,” he explained. “The culture we want to build with Newman is that you don’t put your faith on the shelf until you’re 35 years old and then say, ‘What’s that about?'”

“FUN TO BE WITH”
Sister Janice said Koinonia retreats provide a good foundation.

Started again in the spring, another retreat was held last weekend. She would like to have two each year not only because Koinonia retreats deepen faith, but they inspire the students to get involved in other things, such as mission trips and service opportunities.

These student leaders also become active on the student service team, which oversees all aspects of life at St. Francis of Assisi. Some of the members are starting a Bible study, made possible with materials loaned to the Newman Center by St. Paul’s Parish in Macomb.

The Franciscan Sisters hope to make more connections with the parishioners at St. Paul’s as well as foster the growing RCIA process at St. Francis of Assisi, plan a follow-up to a successful speaker series on the Holy Land, and host more events like the recent chant workshop by Angela Manney of the Cathedral Choir School.

“What’s happening is they’re telling their friends, ‘Come over here. You have to see this,'” Deacon Sondag said.

The students aren’t the only ones to benefit.

“They’re fun to be with,” Sister Janice said. “We’re enjoying them.”