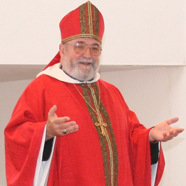 PERU — It was appropriate that Abbot Philip Davey, OSB, should receive his abbatial blessing as the eighth spiritual leader of St. Bede Abbey on Sept. 14, the Feast of the Exaltation of the Holy Cross.

Elected on June 8, he received a large pectoral cross after accepting his new responsibilities to God and his community, as well as the people the Benedictines serve. Since then Abbot Philip said he’s been “kneeling in the Garden of Gethsemane. The blessing was an act of embracing the cross.”

Bishop Daniel R. Jenky, CSC, conferred the abbatial blessing on Abbot Philip during a festive Mass in the St. Bede Abbey Church which included the community’s 26 monks, priests of the Diocese of Peoria and more than 200 guests. Among them were representatives from St. Vincent Archabbey in Latrobe, Pa., whose monks established St. Bede Abbey, and neighboring St. Procopius Abbey in Lisle.

Also present was Abbot Matthew Leavy, OSB, of St. Anselm Abbey in Manchester, N.H., a friend and former classmate of Abbot Philip’s from San Anselmo in Rome and Duchesne University. Another guest, Abbot Placid Solari, OSB, of Belmont Abbey in North Carolina, had spoken about the role of an abbot to the monks at St. Bede prior to Abbot Philip’s election.

ABBOT AS “ABBA”
Installed and given the full duties and responsibilities of an abbot on the day of his election, Abbot Philip said the abbatial blessing is the formal blessing of the church and is given on behalf of the church. It takes place after the homily and the Litany of the Saints.

During the ritual he received a copy of the Rule of St. Benedict so that he would always keep before him what is expected of him.

“Benedict is quite detailed, explicit and demanding about what kind of person an abbot should be,” Abbot Philip told The Catholic Post. “It explicitly says that since ‘abbot’ comes from ‘abba’ or father, I have to consider myself to be the father of the monastic community and help the monks grow spiritually and guide them on that journey.”

Three other things are conferred during the rite of blessing: a crosier or pastoral staff, a ring and a miter. The crosier symbolizes an abbot’s role as the shepherd of the monastery, while the ring and miter became tradition at a time in church history when abbots were also bishops, Abbot Philip explained.

“What is more delightful than the voice of the Lord calling out to us?” Bishop Jenky said in his homily, quoting from St. Benedict.

“Today and always, may this community of monks — and our entire local church — listen to God’s Word, be guided by the Holy Spirit, and glory only in the cross of our Lord Jesus Christ, for he is our salvation, our life and our resurrection,” Bishop Jenky said.

After Mass, the celebration continued with a meal in the St. Bede dining rooms.

Those who couldn’t attend the liturgy will get a chance to hear it, thanks to WSOG 88.1 FM in Spring Valley. The station recorded the Mass and plans to broadcast it and stream it over the Internet.