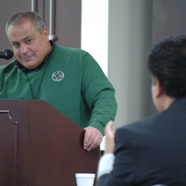 The surging Latino population in the United States is a gift that Catholic parishes and schools must be better willing and prepared to receive, an expert on the topic told priests of the Diocese of Peoria on Sept. 29.

In return, said Father Corpora, Latinos will “bring to the table a rich understanding of church,” their love for priests will “renew a love for clergy in the U.S.,” and their sheer numbers will help “keep our schools open and parishes vibrant.”

“We’ll all win if we’re able to do this,” said Father Corpora, director of the Catholic School Advantage Campaign, a University of Notre Dame-sponsored effort to double the percentage of Latino children in Catholic schools by 2020.

Bishop Daniel R. Jenky, CSC, agreed. Speaking to the nearly 100 priests gathered at the Spalding Pastoral Center in Peoria after Father Corpora’s presentation, he modified a phrase made famous by Pope John Paul II regarding the church in the East and West to cite the importance of welcoming Latinos.

“We have to breathe with both Anglo and Hispanic lungs or we will die,” said Bishop Jenky. “This is all about God, and it’s about passing on the faith as best we can.”

PRACTICAL STEPS
Father Corpora opened his presentation by documenting the rapid growth of the Latino population in the U.S. — from 14 million in 1980 to 50 million in the 2010 census. The U.S., he said, is now “the second largest Spanish speaking country in the world.”

The majority of practicing U.S. Catholics under the age of 35 are Latino, claimed Father Corpora. Yet only three percent send their children to Catholic schools. Why?

“Everybody thinks it’s because they can’t afford it,” said Father Corpora. “That’s not true, but the conversation usually stops there.”

Father Corpora is travelling throughout the United States to rekindle that conversation and point out ways parishes and schools can better embrace and serve the Latino population. Along with a need for more Spanish-speaking clergy, he urged Catholic institutions to:

— Find a cultural “mentor” who understands Latinos and can help staff understand their likes and dislikes.

— Recognize that Latinos are not Europeans and that they approach life differently. While church leaders in the U.S. often emphasize efficiency, Latinos are “relational,” making greeters and secretaries who are friendly and interested all the more important. “If they do not feel welcomed in the parish, they won’t get to the school,” said Father Corpora.

— Be creative, including in school tuition pricing. “The best form of school development is a child in a seat,” he said. Good things will happen, he guaranteed, if “we fill up every seat in the classroom.”

Father Corpora, who has served as pastor of parishes in Arizona and Oregon, especially recommended the practice of establishing committees of “madrinas” (godmothers) — bilingual women who will take the lead in establishing a relationship with Latino families, following up with them after a school visit, assisting them in filling out forms, etc.

“Women in this culture play a huge role,” said Father Corpora, and “madrinas” within the Latino community are easy to identify. “Go to a Spanish Mass. In six minutes you’ll find them,” he guaranteed.

Father Corpora acknowledged that serving in a bilingual parish is more challenging than in a monolingual, but the rewards are great. Among the gifts Latino Catholic culture offer is a “sacramental approach to life” that treasures and respects older people and sees the parish as “a place of fiesta and forgiveness.”

“We’ve lost 5,900 Catholic schools since 1965,” he told the priests. “In the last 10 years, we’ve lost 1,500. Another 1,500 will close unless we turn around the Latino thing.” Latinos, Father Corpora said, will “bump the church toward becoming slightly counter-cultural again.”