30th Respect Life Dinner reflects the full spectrum of cause 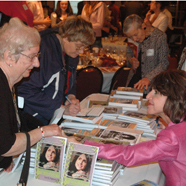 The full spectrum of Respect Life Sunday was on display for a capacity crowd attending the 30th annual Respect Life Dinner in Peoria on Oct. 2.

Calls to protect pre-born life, courageously live this life, and support those who are disabled or nearing the end of life were voiced during the event, hosted by the Cater Inn banquet facility. The dinner raised more than $3,000 for the Family Resources Center in Peoria.

But this year’s event also had the 175 in attendance mindful of eternal life. It was dedicated to Father John J. Dietzen, the founding chairman of the Diocese of Peoria’s Respect Life Board who died in late March.

“Father Dietzen will be remembered when the history of the pro-life movement is written,” said Father William Miller, IC, the current board chair. Father Miller noted his predecessor’s involvement in the cause even before the 1973 U.S. Supreme Court decisions legalizing abortion and praised his “perseverance” in the decades that have followed.

Father Miller also thanked those at the dinner — many of whom hours earlier had taken part in prayerful, public protests of abortion called “Life Chains” — for “all you do in the trenches.” He encouraged them to continue their commitment to education, public advocacy and prayer promoting respect for life from conception to natural death.

“WITH COURAGE, YOU CAN!”
Echoing and focusing that encouragement was keynote speaker Lisa K. Gigliotti, who has endured major health challenges and family tragedies to become an administrative law judge and author of a series of life-lesson books on “Coraggio!,” Italian for courage.

A resident of Michigan — home of the late assisted suicide proponent Dr. Jack Kevorkian — Gigliotti especially urged those in the pro-life movement to speak and act in support for the disabled, the aged, and the dying.

“I’m asking the Holy Spirit to put each of your hearts on fire to really spread the good news about loving people who are disabled or at the end of life,” said Gigliotti. “With courage, you can!”

Gigliotti speaks from courageous experience. Diagnosed with severe rheumatoid arthritis when she was a college pre-med student, her caregiving mother and grandmother were killed just a few years later in a car accident.

Moved to a nursing home, Gigliotti cried out in prayer one night and heard again the response of her Italian grandmother when she shared her original diagnosis: “Coraggio, Leeza. Coraggio.”

“It was a Holy Spirit moment when you know that God’s mercy and grace are upon you,” she told the crowd. Gigliotti eventually completed a law degree, and after 10 major surgeries has become an outspoken advocate for persons with disabilities, especially in her home state of Michigan.

Citing advances in pain control and research showing that patients who report spiritual fulfillment or social support may be less bothered by their physical symptoms, Gigliotti said it was vital that we embrace the “humble work” of journeying with them.

“All of us have the courage within us, through the strength and the goodness of God,” said Gigliotti. The woman who has overcome so much advised those in her audience “don’t ever let anyone tell you that you can’t do something.”

More information on Gigliotti’s life and books are available online at the Coraggio website.

REMEMBERING FR. DIETZEN
Several of the evening’s speakers praised the courage of Father Dietzen, a former associate editor of The Catholic Post who in addition to his pro-life work was a pioneer in family life efforts, was a longtime pastor, and for nearly four decades authored a nationally syndicated question-and-answer column.

Jan Smith, director of the Family Resources Center — a pro-life, free-loan library in downtown Peoria — told The Catholic Post that Father Dietzen had attended all 29 previous dinners and had supplied $2,000 seed money to help launch the center in 1980. Now located at 321 Main Street, the center has grown to include nearly 30,000 free loan videos and DVDs, thousands of books, and produces a newspaper regularly mailed to 24,000 supporters.

“From the time I met Father Dietzen right after his ordination, I felt like God had his hand on his shoulder,” Smith wrote in a tribute appearing in the dinner program. Her husband, Pete, gave an update on the work of the Family Resources Center, and agreed with Father Dietzen’s long held belief that “education is key to reaching others with the truth.”

Other speakers encouraged participation in the “40 Days for Life” campaign now under way nationwide, as well as prayer to Jesus in the Blessed Sacrament to end abortion.

“Do a holy hour,” encouraged Father John Grigus, OFM, pastor of Holy Family Parish in Peoria who gave the closing prayer. “It is a time that Jesus will give you courage to face the trials of your own life and the work of pro-life.” Father Miller, meanwhile, reminded those in attendance about a monthly holy hour for the rights of the unborn at Rosmini House in Peoria.

John Paul Deddens of Urbana, executive director of Students for Life of Illinois, and other speakers encouraged prayer outside abortion clinics.

“Bring the joy and the peace of Christ. That is what is really needed where babies are dying.”

More information on 40 Days for Life is available online at 40daysforlife.com.