Hospice Home nears reality for those on life’s ‘final journey’ 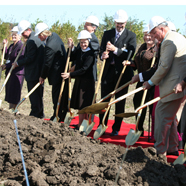 The words were spoken by Dr. Robert Sawicki, senior vice president of supportive care for OSF HealthCare, but echoed by nearly every other speaker at the Sept. 21 groundbreaking for the OSF Richard L. Owens Hospice Home. The $7.5 million facility will be located near the OSF Center for Health on Route 91 in Peoria.

“Breaking ground today means that between next July and next September this building will be done,” said Donna Medina, vice president of hospice and foundation for OSF Home Care Services. “Our hope is that we can take our first patient by December of 2012 at the earliest and February of 2013 at the latest.”

Noting that this is a community project, she said they will be reaching out to every hospital in the area and expect to draw people from a 60-mile radius, serving as many as 1,200 patients and their families every year.
The OSF Richard L. Owens Hospice Home is the first facility of its kind for OSF Home Care Services and the only hospice home in central Illinois, according to Medina.

Sister Judith Ann Duvall, OSF, who chairs OSF Healthcare System, said she hopes it is the first of many as The Sisters of the Third Order of St. Francis continue to offer “the greatest care and love” to the people they serve.

“What an awesome privilege it is to step out onto that sacred ground and to share those precious months, days and moments with those on their final journey home,” she said. “We take this commitment very seriously.”

Sister Judith Ann added that it is their signature love and care — being there for and with the patients through it all, to the very end — is what enables hope to live in the heart of those who are dying.

“Our Sisters are so pleased to see this day finally arrive,” she said. “It’s a gift to this community and surrounding communities. It is a gift from God. He wanted it to happen or we wouldn’t be here today. It’s a gift from our Sisters because we said yes to him.”

And it’s a gift from everyone who donated the money that made the hospice home a reality, Sister Judith Ann said.

“LET’S GET GOING”
The fundraising goal for the hospice home is $10 million, with $7.5 million going to construction and $2.5 million going into an endowment to care for patients who may need assistance.

OSF Home Care Services had to have $6.5 million to break ground, and Medina said they exceeded that goal, raising $6.7 million.

The late Hootie Owens helped them get there by donating $2 million to the home that now bears the name of her husband, Dick. Diagnosed with lung cancer, Richard L. Owens was cared for by OSF Hospice until his death in 2003.

Mrs. Owens made her pledge in August 2010 and died just two months later.

Rick Owens, their son, said that throughout Mrs. Owens’ life she been at the bedside of people who were dying, starting with her own father.

“It’s safe to say Mom knew a little something about those who are in their final days and don’t have much longer to live,” Rick Owens said. “That’s most likely why she felt that we really needed this facility in the community and why she donated so generously to it.”

He said his mother sometimes grew impatient for work on the home to begin and would have been so excited to see what was happening.

“I’m going to step away now so we can get started building. I know that’s what Mom would have wanted,” Rick Owens said. “Let’s get going.”

The OSF Richard L. Owens Hospice Home, which was designed by OSF Corporate Engineering, will have 16 private rooms, including one that can accommodate an infant or a child. P.J. Hoerr Inc. is handling the construction.