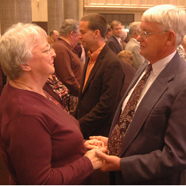 A snowstorm delayed the wedding Mass of John Sheen and Zelda Yagel for a half hour on Dec. 30, 1961. Fifty years, three children, nine grandchildren, and two great-grandchildren later, it was obviously worth the wait.

“I smiled so long and so much that day my face was frozen in a smile,” recalled Zelda and yes, with a smile.

The Sheens — originally from Missouri and since the 1970s members of St. Mary’s Parish in Downs — were among couples from throughout the Diocese of Peoria observing golden and silver anniversaries in 2011 who filled St. Mary’s Cathedral last Sunday for the diocese’s annual Anniversary Mass.

The celebration is coordinated by the diocesan Office of Family Life.
The liturgy very much resembles a wedding in music, selected readings, and the number of blessings for the couples.

“When the Scriptures look for an image to describe how Jesus Christ loves us, they teach it is the way an ardent husband loves his beautiful bride,” said Bishop Daniel R. Jenky, CSC, who presided at the Mass and led the couples in a renewal of their marriage vows.

“So not only are your families celebrating, so is the church,” he continued. “You are living, outward signs of God’s great love.”

HOW THEY MET, AND OTHER STORIES
Following the Mass, Bishop Jenky greeted each couple and posed for photos. The honorees and their families then were welcomed to a reception at the Spalding Pastoral Center, where they traded stories about how they met and what has kept them together.

“We literally bumped into each other” at a dance sponsored by their neighboring parishes, recalled Marcelo and Letitia Algrain, a silver anniversary couple now members of St. Jude’s Parish in Peoria. Marcelo was line dancing with Letitia’s sister when he accidently ran into his future bride.

The Sheens, meanwhile, met when John’s brother married Zelda’s cousin. They were both in the wedding party at ages 16 and 14. They wouldn’t begin dating, however, until Zelda’s 21st birthday.

“John went to a rival high school and there was no way I’d date someone from that school,” she recalled to The Catholic Post. And though they remain opposites in many ways today — he’s laid back, she’s more chatty and excitable — “I knew enough about myself that it was him that I needed.”

They were married during a college semester break, said John, because Zelda “was afraid I might take off, so she got me while the getting was good.”

SELF-SACRIFICING LOVE
Bishop Jenky began his homily by acknowledging that even the best preachers have only four or five wedding homilies in their stock that they personalize for each couple. “Priests have to retread a lot,” he said.

And then he did the same, sharing a wedding ritual sermon from the days that the same homily was read at all Catholic wedding Masses.

The golden anniversary couples would recognize it, he said, but “those kids married 25 years ago will hear it for the first time.”

The sermon emphasizes the sacred and serious nature of marriage, which was “established by God himself.” Calling marriage “a great mystery bound up with the union of Christ and his church,” Bishop Jenky called the couples to “a life of self-sacrificing love like Jesus’ own.”

The bishop thanked God for the “long and happy marriages and for the children (the couples) have brought into the world and for all the good they have done.”

“As you blessed the love of their youth,” he prayed, “continue to bless their lives together with your gifts of peace and joy.”