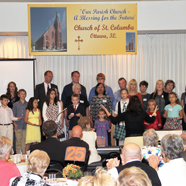 Photo Caption: A combined choir from St. Columba’s Parish, Ottawa, sings Sept. 25 at a program launching the parish’s $3.3 million capital campaign to restore the exterior of the historic church.

OTTAWA — The story of one of the oldest faith communities in the Diocese of Peoria began a new chapter Sunday.

Nearly 400 members of St. Columba’s Parish here packed the Knights of Columbus hall to witness the launch of a $3.3 million capital campaign to repair and renovate their historic church, dedicated in 1884. The parish itself is the second oldest in the diocese, tracing its roots to 1838.

Sunday’s ceremonies marked the start of the first phase of the fundraising campaign, which will seek pledges to support a total restoration of the church exterior under the theme: “Our Parish Church: A Blessing for the Future.”

“It’s a big project,” acknowledged Father David Kipfer, pastor. Plans outlined by BLDD Architects of Bloomington — which has consulted with the parish building committee for several months — include removal of a gray, stucco-like exterior and restoration of the original red brick exterior, a new slate roof, copper guttering, and the cleaning and re-leading of the stained glass windows.

“There has been no major work on the church for many decades,” said Father Kipfer. The parish has known for years that the church’s needs had gone beyond “patching and repairs,” he added, but other priorities such as participation in the diocese’s capital campaign or the establishment of Marquette Academy took precedence.

Last Sunday, it was all about St. Columba’s beloved Gothic church, an Ottawa landmark at 122 W. Washington St. for 127 years.

THIS GENERATION’S TIME
“Generations ago area Catholics made sacrifices to build this beautiful church,” said Father James Kruse, vicar general for the Diocese of Peoria and one of the featured speakers at the Sept. 25 program, which followed a 12:30 p.m. lunch. “Now it’s this generation’s time to sacrifice again for its future.”

He praised the leadership of Father Kipfer, who has guided St. Columba’s Parish since 1997, calling him “the right man to lead the project, at the right time.”

Members of St. Columba’s adult and children’s choirs sang at Sunday’s launch, which was attended by priests from throughout the area. Three families offered their enthusiastic endorsement: Ed and Cynthia Sanderson, Nelson and Karen Nussbaum, and Ray and Sandy Kotek.

“I’m excited about our project,” said Janet Graham, a parish trustee who with her husband Pat serves among the campaign’s general chairs. “It’s something we need to do.”

Graham acknowledged the difficult economic times, but noted pledges can be made for up to five years. “I’m optimistic people will give this prayerful consideration, and confident we will reach our goal. The parish knows it is needed.”

She told The Catholic Post it was “very moving” when the architects Sunday revealed how the restored church — the third edifice to serve the faith community — will appear after completion of the work.

Father Kipfer expressed gratitude for the “very upbeat” start to the campaign.

“I have a parish that is very alive in their faith,” he told The Catholic Post. “Whenever I’ve asked them to help, they’ve responded.”

Before embarking on the campaign, St. Columba’s conducted a feasibility study with the help of Joseph Consulting of Bettendorf, Iowa. Parishioners will receive further materials in the coming weeks, and pledges will be sought throughout the remainder of 2011. Community support is also encouraged.

It is hoped that renovations can begin in the spring of 2012. A future second phase will address the church’s interior needs.