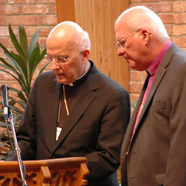 BLOOMINGTON — With immigration politics becoming more impassioned as an election year approaches, Cardinal Francis E. George of Chicago told a statewide ecumenical gathering here Sept. 22 that “welcoming immigrants could be key to a renewal of our society.”

Cardinal George voiced hope the immigration debate would lead not to more legalism and individualism, but instead result in “a new spirit of empathy, a renewed sense of mission.”

He was homilist at a prayer service opening the annual assembly of the Illinois Conference of Churches. This year’s event drew leaders from more than a dozen denominations to St. Luke Union Church in Bloomington for prayer and discussion on immigration’s impact within the state.

Throughout the day, speakers encouraged faith communities to learn and share the personal stories of immigrants living in their regions.

“LET’S TRY TO WIN HEARTS”
Robert Gilligan, executive director of the Catholic Conference of Illinois, told the group that church leaders are uniquely suited to bring such stories to political representatives. Now would be a good time to do so, he added, even though the “highly charged” political climate means comprehensive immigration reform backed by the church is unlikely to pass in the near future.

“What the faith community can do now is open the door to better understanding,” said Gilligan. “Let’s try to win the hearts (of politicians). We’re best when we’re talking about individual stories. . . . saying, ‘Here’s what my neighbor is going through.'”

Several such stories were told at the conference.

Cardinal George began his homily by telling how, shortly after his ordination two decades ago as Bishop of Yakima, Wash., he was approached by Hispanic farmworkers seeking to form a union.

While Cardinal George expected the farmworkers to say they desired improved wages, health care, or housing, they instead told him, “Bishop, they don’t respect us. We’re not treated as people the way the growers treat one another.”

Christians can help renew society, said Cardinal George, by treating and seeing others as God does. Too often acceptance is based on one’s status in civil law, and “someone who is illegal is somehow less than a human being.”

“God’s ways are not our ways,” Cardinal George reminded the group. While the political course ahead is admittedly difficult, he said hope remains because the Holy Spirit is always at work “quietly, sneakily.” He urged the bishops and pastors present to help those in their care “turn toward creating the spirituality of neighborliness and, through faith, brotherhood.”

FREED FROM FEAR
Also speaking at the conference was the Rev. Michael Mann, associate director of mission and advocacy for the Northern Illinois Conference of the United Methodist Church. He outlined passages in Scripture that speak of welcoming the stranger, and told the story of Juan Carlos, who came to the Rev. Mann’s community of Carol Stream from Guatemala.

Carlos’ father had been murdered when he was 15. He was robbed as he journeyed to the U.S. through Mexico so he arrived penniless. When he turned 19, he was stabbed in an attack. Police convinced him to testify against his attacker, and recommended him to a legal clinic run by the Methodist church.

“In August he walked out, and for the first time said, ‘I don’t have to be afraid anymore,'” said the Rev. Mann.

Christians should go beyond occasional hospitality and “partner” with immigrants, he said.

“We in our churches have a responsibility to work together and see (immigrants) are welcomed in the life of the church and are able to live without fear,” said the Rev. Mann.

Presiding with Cardinal George at the opening prayer service was the Rev. Dr. Gary Wollersheim of Rockford, bishop of the Northern Illinois Synod Evangelical Church in America. A co-chair of the leadership team for the Illinois Council of Churches, he prayed that those in attendance recommit to “walk with our immigrant brothers and sisters as they seek to be welcomed and embraced by this country as has every other generation of immigrants from the founding of our nation.”