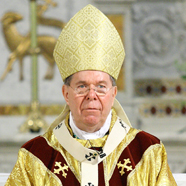 Photo Caption: Archbishop Daniel M. Buechlein of Indianapolis is pictured during an ordination in early March. Pope Benedict XVI has accepted the resignation of Archbishop Buechlein for health reasons.

The archbishop is 73 years old, two years younger than the age at which bishops are required by canon law to turn in their resignation to the pope.

His resignation was announced in Washington Sept. 21 by Msgr. Jean-Francois Lantheaume, charge d’affaires at the apostolic nunciature.

Archbishop Buechlein, a member of the Benedictine order, has headed the Archdiocese of Indianapolis since 1992.

Over the past three years he has suffered a series of health problems. In March of this year he suffered a mild stroke. In 2009, Archbishop Buechlein had shoulder replacement surgery and in 2010 he had surgery to remove a benign tumor from his stomach.

In 2008, he was diagnosed with Hodgkin’s lymphoma and underwent a successful course of chemotherapy and radiation treatments.

A native of Jasper, Ind., Archbishop Buechlein professed vows as a Benedictine monk and was ordained a priest for the St. Meinrad Archabbey in 1964. He holds a licentiate in sacred theology, specializing in liturgy, from the University of San Anselmo, Rome.

He was ordained a bishop in 1987, when he was named bishop of Memphis.

As a member of the United States Conference of Catholic Bishops, Archbishop Buechlein served a chair of the Ad Hoc Committee for Use of the Catechism of the Catholic Church and chair of the group for the Revision of the 4th Edition of the National Conference of Catholic Bishops Program for Priestly Formation. He has served on the U.S. bishops’ Committee on Divine Worship and the Committee on Evangelization and Catechesis.

The Indianapolis archdiocese is in southern Indiana and includes 2,430,606 people, of whom 224,926, or nine percent, are Catholic.