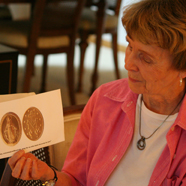 Photo Caption: Fran Corrigan of Streator can’t take metal into the correctional center, so she prints out an image of the Miraculous Medal and accompanying prayer for the women she instructs in the Catholic faith.

STREATOR — When Fran Corrigan goes to Dwight Correctional Center each Thursday for Mass and faith formation with the women incarcerated there, she isn’t allowed to bring much with her. Even a Miraculous Medal is off limits.

And yet, she still manages to bring Jesus to those who need a message of hope, an assurance of love and someone to believe in.

“Everyone I see is searching for God in some way,” said Corrigan, a member of St. Michael the Archangel Parish who has been visiting Dwight since 2007. She is part of a team headed by Father James Rickey, pastor of St. Patrick’s Parish in Dwight and a chaplain at Dwight Correctional Center.

“They want to know God. They want forgiveness. They’re searching,” she told The Catholic Post.

Corrigan is one of hundreds of catechists around the Diocese of Peoria who will be remembered in prayer and a variety of honoring events as part of Catechetical Sunday. Always held on the third Sunday of September, Catechetical Sunday was started by the U.S. bishops to affirm the work of those who help people of all ages grow in faith.

This year’s theme is “Do This in Memory of Me” and is designed to dovetail with efforts to prepare people to receive the new English translations of the Roman Missal on the First Sunday of Advent.

EVER RESOURCEFUL
Raised on a farm in Sunbury, Corrigan said “everyone was Catholic.”

“My parents were extremely Catholic,” she said, explaining that they “thought Catholic” by living out their faith. She credits them for her knowledge and love of Catholicism and her ability to share it with others.

A teacher by profession, Corrigan taught for 40 years in Illinois and New York State. “It was a way of reaching others — everyone has a desire to give,” she said simply.

Even though she is retired, she still volunteers in recordkeeping at St. Mary’s Hospital in Streator.

As a church volunteer she was once asked what she would like to do. She wrote down “prisons” and didn’t think about it again until Msgr. John Prendergast, who was pastor at the time, asked her, “What are you doing about it?”

He put her in touch with Father Rickey and the team now includes Joanie Johnson and Marsha Klein, who is currently on sick leave, and a Catholic gentleman from Dwight, who did not wish to be named for this story.

Each visit starts with Mass and then the group splits up into teams, with Johnson and the parishioner from Dwight working with the women who are Catholic and Corrigan and Klein working with those who wish to become Catholic.

Since she couldn’t find a book she liked, the former teacher makes lesson folders by drawing on materials from the Internet and other resources. She starts with the basic premise that “God is love” and “Love your neighbor as yourself” and then helps the women explore prayer, the sacraments and the Mass, their current topic.

Ever resourceful, what she can’t bring in for security purposes — the Miraculous Medal, for example — she provides in other ways. In this case, Corrigan found an image of the medal and printed both sides for her “students” at Dwight along with the prayer.

GETTING TO THE HEART
While the information is important, Corrigan said the personal interaction is an important part of the ministry.

“We start by handing the Mass book out and talking to them individually,” she said. “You try to get to a lot of people.”

When they’re with the general prison population the women are not allowed to touch one another or give anything to each other, she explained, so at the Sign of Peace they will go all over the chapel to greet one another. “Father Rickey knows that’s what they need,” Corrigan said.

One of their great joys has been welcoming Bishop Daniel R. Jenky, CSC, who confirmed the women that the team helped to prepare for the sacrament.

Corrigan acknowledged that sometimes it’s difficult to sleep after she goes to Dwight. What she has seen and heard over the last four years has made an abstract concept very real for her and changed her understanding of people, other religions and the world, she said.

What she worries about now is what will happen to the women once they leave.

For the time being, Corrigan does what she can.

“When I was teaching grade school I couldn’t mention God, but I gave them some principles to live by,” she said.

And she still does: Love God. Love your neighbor as yourself. Love God completely.