Prayers for crops, safety at harvest Mass in Farmer City 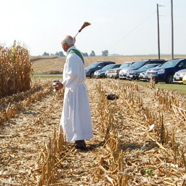 By: By Sarah B. Williams

FARMER CITY — The great outdoors was the setting for Sunday’s Mass at Sacred Heart Parish here.

With the sun shining and the corn in the fields readying for harvest it was a perfect day for the parish’s fifth annual Harvest Mass that took place on Sept. 11. The annual liturgy is celebrated outdoors at the home of a farm family. This year Jim and Lisa Stoutenborough welcomed area Catholics to their land in rural Farmer City.

“It is a blessing to have all of you here and to have such a nice day,” said Jim Stoutenborough. “Let’s enjoy the sun and good weather.”

Father Jim Henning, OFM Conv., pastor of Sacred Heart Parish — as well as St. John’s, Bellflower, and St. John the Baptist, Clinton — said he enjoys the Harvest Mass because it’s fitting for a rural community to bless the farmers and crops before the harvesting season begins.

“There was always a Mass set aside at the beginning of the harvest season to seek God’s blessing on the work of the harvest,” Father Jim said. “This is different from a Thanksgiving Mass. It is a prayer for the harvest.”

Past Masses have taken place at the homes of Jack and Cindy Houser in 2007, Vic and Phyllis Fehr in 2008, Karl and Peggy Swigart in 2009, and Don and Veronica Zeitler in 2010, all of Farmer City.

During the homily, Father Jim reflected on the 10-year anniversary of the Sept. 11 terrorist attacks as well as the harvest.

Father Jim continued that towers may fall, crops may be destroyed and people may become angry with God because of those circumstances or others, including if a loved one is taken from us or a seed doesn’t sprout because of lack of rain.

“We have every right to be angry with God,” he said. But noting the forgiveness theme of the day’s readings, Father Jim said that extends even to “when nature gives us a blow to the jaw” such as this summer’s drought affecting yields in the region.

There is always reason for gratitude as “we are fed and watered by God’s almighty hand,” said Father Jim.

After Communion, the local farmers who will be helping with this year’s harvest were asked to come forward for a blessing. “We have combines and GPS units to guide the tractors in the fields but it still takes the work of the people for the harvest,” Father Jim said. “May these servants give you thanks in their work, may they seek your aid in all they do and may the farm, the heart of our nation, be realized as birthing your many blessings,” he prayed.

Following singing of “America the Beautiful” in remembrance of Sept. 11, Deacon John Leonard and Father Jim led those assembled to the fields for a blessing of the crops. Extending their right hands toward the corn, they bowed their heads in prayer as Father Jim asked for God’s blessings on this year’s harvest.

“We pray for the farmers and all those in the world who have planted the seed and tended the crops through the days of dryness and days of too much heat,” Father Jim prayed. “Grant that they may receive justice, a fair return for their labor and hope for future blessings. Please bless this field, bless all the farms in this parish community and bless all farm families.”