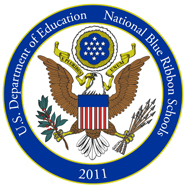 NORMAL — Epiphany Catholic School has been recognized as a 2011 National Blue Ribbon School by the U.S. Department of Education, one of 304 schools to receive the distinction and among only four in downstate Illinois.

The announcement was made Thursday morning by Arne Duncan, U.S. Secretary of Education. Epiphany school and parish representatives will accept the award at ceremonies in Washington, D.C. on Nov. 14-15.

“It rewards many people for a whole lot of work,” said Mike Lootens, Epiphany principal.

Msgr. Eric Powell, pastor, said the parish community is thrilled at the news.

Msgr. Powell said the school ? which features a total enrollment of 382 in pre-K through junior high — is “here to stay, and we will constantly strive to refine and enhance the education and formation we offer our parish children.”

Epiphany School’s National Blue Ribbon designation was based on the school’s academic excellence as measured by performance on nationally normed tests. Epiphany joins St. Vincent de Paul School in Peoria — a 2010 Blue Ribbon School — as the only two Catholic schools of the Diocese of Peoria to earn the high national recognition.

“It’s a wonderful honor for the school, the school community, the faculty, administration, the parish, the pastor, and the parents who support the school,” said Brother William Dygert, CSC, diocesan superintendent of schools. “Congratulations to all of them.”

Epiphany is one of only 49 private schools in the U.S. to be recognized as 2011 Blue Ribbon Schools.

Lootens, who is in his first year as principal, said the application process was already “in the pipeline” when he arrived. Both he and Msgr. Powell pointed to a strong partnership between the Epiphany Catholic School staff, parents, and the entire parish community.

In 2005, the school partnered with educational consultants from “Modern Red Schoolhouse” to refine and enhance the formation it provides. Msgr. Powell expressed a special word of thanks to benefactors who have privately financed that beneficial endeavor.

“I believe our greatest strength is a widely diffused stewardship mentality,” said Msgr. Powell. “Our teachers and staff bring their utmost to the educational calling. They are passionate educators.”

Lootens said how the recognition will be celebrated locally is still being considered, but that the news will be incorporated in a nearly completed promotional video the school is producing. The video, as well as the publicity resulting from the Blue Ribbon status, will help “tell the good story that is Epiphany Catholic School.”

“In a family, children are the priority,” he said. “It is a pleasure to be able to generate interest in our mission and diffuse within our community the good news of top-tier education, in a faith based environment. Catholic schools can be as challenging as others while also serving the cause of Christ.”

Secretary of Education Duncan called the success of this year’s honored schools “an example for others to follow.”

Epiphany Catholic School had already been established for two years when the parish was formed in 1966. A major expansion project was completed in 1998, and in the fall of 2010 the Kathryn Marie Albee Early Learning Center was opened in conjunction with a church renovation and expansion.