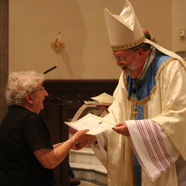 Photo Caption: Barbara Bogner of Bradford receives a certificate of commissioning from Bishop Jenky at the annual Pro-Life Mass at St. Mary’s Cathedral in Peoria on Sept. 10 preceding the Respect Life Workshop.

Talking to respect life representatives from around the Diocese of Peoria last Saturday, Bishop Daniel R. Jenky, CSC, said the United States is increasingly “building our house on the shakiest foundation there could be — a disrespect for human life, a complicity in murder, a culture that denigrates the value of human beings from conception until natural death.”

Inevitably our house will be shaken unless we are transformed, he said in his homily at the annual Pro-Life Mass at St. Mary’s Cathedral in Peoria.

Father William Miller, IC, who chairs the diocesan Respect Life Board, concelebrated the Mass, which included a commissioning of the respect life coordinators. A Respect Life Workshop followed at the Spalding Pastoral Center, with the afternoon session hosted by the Family Resources Center in downtown Peoria.

Bishop Jenky thanked the men and women for their many years of work and noted that the number of Americans who identify themselves as pro-life keeps going up, “despite endless propaganda in the media and Hollywood and despite our spineless politicians, who would sell their mother for a vote but don’t seem to care about our votes. One of these days they’d better start.”

Illinois is facing some very serious problems at this time, he told them.

“The attacks that have been made on Catholic Charities are because Catholic Charities is pro-life, pro-family, pro-marriage,” Bishop Jenky said. “They want us out of the good work this diocese was doing when the State of Illinois could care less for homeless and abused little children.”

Catholic Charities of the Diocese of Peoria has been seeking to maintain its longstanding practice that prospective adoptive and foster care parents who are cohabiting be referred to other agencies or the Department of Children and Family Services. Lawyers for the Illinois Attorney General argue that the policy violates state anti-discrimination laws that accommodate gay and lesbian couples in civil unions.

HEALTH CARE NEXT
Bishop Jenky said that Catholic health care may be next on the firing line.
U.S. Secretary of Health and Human Services Kathleen Sebelius has proposed a federal mandate that would require all health care plans to cover prescription contraceptives. In addition, it narrows the definition of who is considered a religious employer, seriously restricting exemptions based on conscience.

“I ask any of you from central Illinois — which hospitals take in the victims of crime and violence and accidents and turn no one away? And yet that won’t stop (politicians) from opposing Catholic health care because our hospitals are pro-life, pro-family and pro-marriage,” he said.

Bishop Jenky said he wasn’t intimated, however, because “our church is built on the foundation of Jesus Christ. . . . The power of God is invincible.”

Before inviting the respect life representatives to come forward to receive their certificates of commissioning, Father Miller thanked Bishop Jenky for “your clear teaching, your strong preaching and your fearless leadership of the flock entrusted to you.”

“In a special way we thank you for your commitment to this yearly Mass, which is a concrete reminder to all of us that it is here at the altar of the Lord where we draw our strength and renew our purpose to return to the trenches,” Father Miller said.

CONDUITS OF GOD’S LOVE
The keynote speaker for this year’s workshop was Vicki Tyler, executive director and CEO of the Women’s Choice Center in Bettendorf, Iowa. Also participating in the morning session were Dawn Behnke, a lobbyist for the Illinois Federation of Right to Life since 1991, and Ralph Rivera, who has been lobbying for pro-life legislation for 28 years.

“We feel very much today like we’re on holy ground,” said Tyler, who was assisted by her husband, Todd, during her presentation. “People such as yourselves have worked the ground, dug it up at times and are still in the fight for life.”

She said she has seen women as young as 12 and as old as 52 walk through the doors of the Women’s Choice Center looking for help. They all receive the same thing: respect and an assurance of God’s love.

Those who are working to protect life in parishes and crisis pregnancy centers around central Illinois must also be the conduits of that love, she said.

Tyler offered the 125 respect life representatives a special challenge: to extend that loving care even to women who have had abortions. She noted that one in three women have had one and shared that she was one of them.

“We are the face of abortion in your community,” she said. “There are many women, as well as men, that are too ashamed to tell anyone. They need you also.”

She acknowledged that it can be difficult for people in the life movement to wrap their minds around why anybody would have an abortion, but asked them to reach out anyway.

“Take the time to be with them, help them and do what you can in ministering to them,” Tyler said. “It’s very important.”

She also asked them to keep praying.

“Those prayers are heard,” she said. “As warriors for Jesus Christ, we have the victory.”

Behnke and Rivera explained how important it was for citizens to maintain contact with their legislators, especially through personal visits. E-mail is just as good as a letter as long as it is signed and includes an address and has the advantage of immediacy, Rivera said.

One of the bills he asked them to watch for was legislation that would give women the opportunity to have an ultrasound before an abortion and see it before any action is taken.

“In a crisis pregnancy center, 94 percent of women would choose life,” he said, noting that even if it were only 4 percent that would still save 2,000 of the 50,000 lives lost to abortion in Illinois every year.