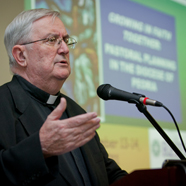 Photo Caption: Msgr. Paul Showalter, PA, vicar general of the Diocese of Peoria, addresses one of eight regional meetings held Sept. 13 and 14 to open the “Growing In Faith Together” process involving all parishes.

ROCK ISLAND — Jerry Fowler of St. Ambrose Parish in Milan admitted to mixed feelings and uncertain expectations when he joined more than 100 other Catholics from the Quad Cities region Tuesday for one of eight meetings this week opening a diocese-wide planning effort with implications for every parish.

Two hours later, he emerged from Farrell Hall at St. Pius X Parish in Rock Island like someone who had just received a gift.

“Seeing Catholics of our area all together is great,” said Fowler, who had just rubbed elbows with teams of Catholics from about 25 other Quad City area parishes as the “Growing In Faith Together” (GIFT) pastoral planning initiative got under way across the Diocese of Peoria on Tuesday and Wednesday.

“We don’t do that enough,” said Fowler.

That will change in the coming months as all parishes — individually, in neighboring “clusters,” regionally and diocese-wide — respond to Bishop Daniel R. Jenky’s call to explore ways to be stronger and more effective by working together.

A major step in the yearlong process were the regional gatherings held this week in Rock Island, Bloomington, Ottawa and Peoria on Tuesday and Champaign, LaSalle, Monmouth and Washington on Wednesday. Each parish and mission in the diocese sent their pastor and four members of core teams to learn about the GIFT process and their task ahead.

STRONGER BY WORKING TOGETHER
“I am counting on you and your wisdom to help create a faith-filled plan so that we can be organized in a way that we as a church can be strong and sustainable into the future,” wrote Bishop Jenky in a letter distributed with a binder of planning materials at all meetings.

Expressing his gratitude to all parish leaders taking part, Bishop Jenky outlined the 10 goals of the process, led by “to enhance the vibrancy of parish life in the Diocese of Peoria.” Other goals include improved participation in Sunday Eucharist and the sacrament of reconciliation, promotion of vocations, and building a greater sense of unity, including among English-speaking and Spanish-speaking Catholics.

“Through being in conversations within our parishes and among neighboring parishes, we will discover anew our strengths as well as explore ways we can be stronger and more effective by working together, perhaps in new configurations.”

Every parish, in fact, will be in some kind of new configuration at the conclusion of the process. Representatives of The Reid Group, a consulting firm that is assisting the diocese in the process, outlined the four options at the regional gathering. Merged parishes, linked parishes, partnership parishes, or a group of parishes served by a team of priests.

“This is an important process,” said John Reid, who directed the Rock Island gathering. “It has a significant impact for each of you and the parishes you care about.”

While he told the parish core teams there is a great deal of work ahead, Reid repeatedly emphasized they should invite others to help as they analyze the strengths and needs of their respective parishes.

“The more people involved in the process, the more committed they will be to the outcome,” said Reid.

The first orders of business at the regional meetings were for the parish core teams to name a chair and secretary and begin the process of recommending which neighboring parishes they would like to “cluster” with as the study continues. The clusters could be formed on the basis of size, common history, geography, or other reasons, said Reid, whose group has led several other dioceses through a similar process.

Fowler, who was named to chair the Milan parish core team, liked what he saw and heard Tuesday.

After conversations within their parishes over the next several weeks, the core teams will gather again — seated with their faith community “clusters” — to begin the study’s next phase, a series of recommendations to a Diocesan Planning Commission. The commission is scheduled to make final recommendations to Bishop Jenky by June 22, 2012.