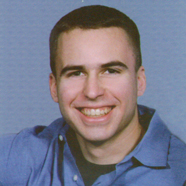 Photo Caption: John and Julie Chan of Peoria Heights tell how their son Chip (pictured) lives on in their hearts ten years after his death Sept. 11, 2001 in the World Trade Center.

When John and Julie Chan of Peoria Heights had a family portrait taken in 2005, a framed photo of their son, Chip, was prominently displayed next to his parents and five brothers.

Even though Charles “Chip” Lawrence Chan died on Sept. 11, 2001, when an airplane piloted by terrorists flew into the north tower of the World Trade Center in New York, he will always be part of the picture for his loving family.

“We get together and we laugh about some of the things we did with him and that he would do, and we talk about what Chip would do in a certain situation today,” Julie said. “He’s in our hearts. We miss seeing him physically, but we know he’s with us.”

Chip was a currency trader with Cantor Fitzgerald and he loved what he was doing, according to his mother. Working on the 105th floor of the north tower, he told his mother “he was on top of the world. That’s how he looked at it.”

He had studied business at the University of Illinois and “once he got a taste of economics he started to like it very much,” John said. “His best friend was going to New York so they decided to go together.”

Chip graduated in January 2000 and by May he was working at Cantor Fitzgerald. He lived just four blocks from the World Trade Center and walked to work, arriving by 6:30 each morning to watch what was happening with the European markets.

He also took his strong Catholic faith — which was witnessed by his parents and nurtured at St. Thomas the Apostle School in Peoria Heights — with him to New York.

Julie said Chip hadn’t settled into a parish yet, but was visiting different churches. Then he went to St. Patrick’s Cathedral.

“He just fell in love with St. Patrick’s and said, ‘That’s the church I’m going to join.’ He said the choir was unbelievable,” Julie recalled. “I said, ‘OK. I like that church, too.'”

And it was that faith and their longtime parish family that helped them cope with the shock and grief that came so suddenly that September morning 10 years ago.

NEVER QUESTIONED FAITH
“The parish was fabulous. The help, the outreach,” Julie said of St. Thomas. “When they say a parish is a family, it truly is a family.”
Leading the way were Msgr. William Watson, pastor, and Sister Rachel Bergschneider, OSB, pastoral associate. John said Msgr. Watson still says a Mass every year.

Then they will do what they always do — go to Springdale Cemetery in Peoria, where there is a grave marker for Chip. Afterward they will go home to spend time as a family.

While their memories bring laughter and tears, there is one thing Chip’s death hasn’t brought.

He added that they never blamed God or questioned their faith.

“It wasn’t God that killed them,” he said. “People say it’s God’s will, but I don’t think God has a will to murder people. Obviously he doesn’t.”
“Man has a choice and God lets us make choices,” Julie said.

IN GOD’S HANDS
Forgiveness is one of the many things they have left in God’s hands over the years.

“We’ll let God make that decision. I don’t need to do that,” John said. “I trust God to handle that.”

“I don’t think we’d be where we’re at without that faith — our relationship and the relationship we have with our children,” Julie said. “We’re here and we’re who we are because of that.”

What brings them joy is that their sons are good men who are practicing their faith. Christopher lives in Chicago and is married with two children. Craig also lives in Chicago.

Matthew was married at St. Thomas last year and became the father of a baby boy last Saturday. They named him Andrew Lawrence, giving him Chip’s middle name.

Mark lives in Peoria and has a daughter, and the youngest, Michael, is in his senior year at the University of Illinois.

“Chip’s best friend, Adam Daley, just had his little boy last Wednesday –his is his second one — and he named him Grant Charles after Chip,” Julie said. “We’re very touched by that. He lives on.”