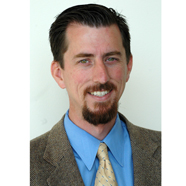 Photo Caption: Craig Dyke defines evangelization as “the proclamation of the good news of Jesus Christ by both word and the testimony of our life.”

He becomes the office’s first director since the retirement of Deacon Greg Serangeli in 2008. Brad Colvis served as associate director with the subtitle of director of youth and young adult ministries until leaving the diocese a year ago.

Dyke said that youth and young adult ministry will continue to be a priority for the office, and that one of his first major projects is coordinating a team of youth ministers to bring back a Diocesan Youth Rally in October. (See related story here.)

The Office of Evangelization will also:

— Continue to implement Theology on Tap, an outreach to young adults, throughout the diocese. The opportunity to discuss the faith in a relaxed setting is now offered regularly in Bloomington, Champaign, Galesburg and Peoria. A young adult retreat is also being for Nazareth House in February.

— Explore different opportunities for adults to grow in their faith life and respond to the call to partake in the church’s mission to evangelize. That will include continuing the Faith-Based Leadership Seminar as well as bringing in speakers throughout the year such as Jason Evert, who in October will give a talk on raising/forming chaste teens.

WORDS AND ACTIONS
Dyke defined evangelization as “the proclamation of the good news of Jesus Christ by both word and the testimony of our life.” He said every Christian is called to evangelize according to his or her gifts and state of life.

“We proclaim Christ not only with our words, but also by the very life we live,” said Dyke, a native of New Hampshire who has a master’s degree in theology and a specialization in catechetics from Franciscan University of Steubenville in Ohio.

His experiences of the last six years in the Office of Marriage and Family — where his chief duties were preparing engaged couples for marriage through the Pre-Cana Conference and Engaged Couple Encounter weekend retreats — also served to prepare Dyke for his new diocesan leadership role, which took effect July 1.

“On a weekly basis I had the honor to share the beauty of the church’s
teaching regarding marriage and family life with all those approaching Christian marriage,” Dyke told The Catholic Post. “Many of these couples struggled in their understanding of the church’s teachings, which made my duty all the more important and exciting.

“Passing on content was not sufficient to help prepare couples for marriage,” he continued. “It was necessary to first win their trust and friendship, and then pass on the good news of Jesus Christ.”

Much of that evangelization was done in tandem with his wife, Amy, with whom he conducted Engaged Couple Encounters. The Dykes also lead a marriage enrichment program called “Marriage on Tap” at their parish (St. Jude’s in Peoria), are Natural Family Planning instructors for the diocese, and will continue to lead marriage retreats at Nazareth House in collaboration with the Servants of the Pierced Hearts of Jesus and Mary.

The Dykes have four daughters, with a fifth child “on the way.”