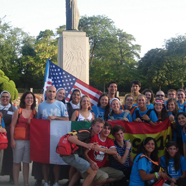 Photo Caption: Members of the “Witnesses to Love” pilgrims to World Youth Day from the John Paul II Catholic Newman Center in Normal pose in Madrid.

Molly McClowry returned from World Youth Day in Spain ready to become the missionary for Christ that Pope Benedict XVI challenged her and 1.4 million other young pilgrims to be.

“I’m so in love with my faith and excited to share it with as many college students as I can,” said McClowry, who will do just that as a new campus minister at the John Paul II Catholic Newman Center at Illinois State University in Normal.

McClowry was among a group of about 30 students who joined the Servants of the Pierced Hearts of Jesus and Mary as pilgrims in mid-August not only to World Youth Day but to Lourdes, where their trip began with a consecration to Jesus through Mary.

“It was so cool to see all the youth so on fire with the faith, all there for the same reason,” she told The Catholic Post this week. Calling the trip “life changing,” McClowry — who graduated from ISU with a teaching degree in May — said she has been wearing a “huge smile on my face” since returning.

Fellow members of her group will share their World Youth Day experiences on a “Witnesses to Love” blog that chronicled their trip in words and photos. The blog can be found through a link at isucatholic.

Meanwhile, Father John Cyr — who guided a small group of pilgrims to World Youth Day — had no trouble figuring out his homily topic to share last weekend at St. Patrick’s, Tolono.

“The bulk of my homily was the World Youth Day experience,” said Father Cyr, who a week earlier was among thousands of priests concelebrating the closing Mass with Pope Benedict XI.

“It was good to see young people excited to be Catholic, and it should inspire the whole church,” said Father Cyr.

Accompanied by four seminarians and two students from the University of Illinois, Father Cyr said the trip included plenty of walking as well as subway, bus, and train rides. He called the experience of camping out at an all-night vigil with more than a million pilgrims “both comical and moving at the same time” as they endured a thunderstorm with no place to go.

The seminarians, he said, were particularly energized by attending a gathering of 6,000 seminarians with the Holy Father.

Finally, more than 50 members of the Neocatechumenal Way from the Peoria and Quad Cities region wasted no time in getting to their task of evangelization, travelling throughout Europe after World Youth Day and returning from their extended trip as The Catholic Post was going to press this week.