Abp. Myers’ heart was joined to Newark flock by 9/11 attacks 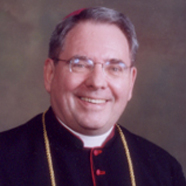 Photo Caption: Archbishop John J. Myers of Newark is a former priest of the Diocese of Peoria who served as Bishop of Peoria from 1990 to 2001, preceded by three years as coadjutor bishop.

NEWARK, N.J. — Even before he could take up pastoral care for the 1.5 million Catholics of the Archdiocese of Newark, Archbishop John J. Myers’ heart was joined to those of his new flock by an act of terrorism.

“My appointment was announced July 24, 2001, and I left Peoria on Oct. 1. In the meantime, 9/11 happened,” Archbishop Myers told The Catholic Post by telephone on Wednesday. “I spent the better part of my first few months with the families who were bereaved and of the officers from the various services.”

He has been told that as many as 800 people from the Newark archdiocese, which sits just across the Hudson River from Manhattan, lost their lives when the towers of the World Trade Center were brought down by terrorists.

“Many people live in New Jersey and work in Manhattan,” he said.

“The priests were wonderful and the people were wonderful,” Archbishop Myers recalled. “Some dioceses sent us gifts to help people with house payments and tuition payments. That was all due to the spontaneous generosity of the dioceses in the country. We didn’t ask them to take up a collection.”

In addition to providing material aid, some of the monies were put aside for counseling, he added.

To commemorate the anniversary, the Archdiocese of Newark commissioned a memorial that will be dedicated next Sunday. It was built in one of the cemeteries that overlooks the Hudson River and has a view of Manhattan, according to Archbishop Myers.

He said it was made possible with funding from Caterpillar Inc., which had equipment at ground zero to help clear the rubble. The archbishop explained that Caterpillar chairman and CEO Douglas Oberhelman and his family are good friends.

“We’re going to have Mass and we expect a very large crowd,” Archbishop Myers said.

As people continue the work of moving forward from the tragedy, he said prayer is the best way to learn forgiveness.

“You just have to pray for it,” he said. “It’s a gift from God. No one can make someone forgive. It is a decision of the heart and between them and God.”

Archbishop Myers, a native of Earlville, is a priest of the Peoria diocese who guided the diocese from 1990 to 2001, preceded by three years as coadjutor bishop.