Dog days for bishop as he welcomes two new puppies 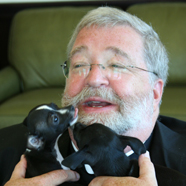 When he leaves his office at the Spalding Pastoral Center in Peoria and goes home, Bishop Daniel R. Jenky, CSC, finds Vicar and Monsignor waiting for him.

Unlike the vicars and monsignors he deals with on a daily basis, however, these two friends aren’t in the mood to talk business. In fact, they’re far more likely to run around his dining room table or dance at his feet until he picks them up.

The two new additions to Bishop Jenky’s household are 4-month-old Chihuahua puppies. He welcomed Vicar and Monsignor about a month ago.

With four white paws and white markings Vicar was almost named Socks, while all-black Monsignor could have been Blackie. Bishop Jenky decided on the more whimsical monikers because “I just thought it would be fun.”

“They’re good about ‘Sit!’ and ‘Stay!’ but not so good about ‘Come!'” said the bishop, who acknowledged that Vicar still has some work to do on his paper training.

A longtime animal lover, Bishop Jenky had a furry friend when he was auxiliary bishop in South Bend. When he was named spiritual leader of the Diocese of Peoria the bishop considered getting a dog but hesitated — until he met Tina and Allen.

Chihuahua puppies from the same litter, Tina and Allen were adopted by Patricia Gibson, chancellor and diocesan attorney, and her family. That’s when her daughter Madeline started her “campaign,” Bishop Jenky said with a chuckle.

“Madeline waged a campaign for the bishop to adopt the brothers because she knew that he missed having a dog and thought this would be a good breed for him,” Gibson told The Catholic Post. “When he met Tina and Allen he fell in love with them, and he saw how well-behaved they were.”

Bishop Jenky brought both puppies home because he thought the companionship would be good for them and make them more confident.
While Chihuahuas tend to be “one-man dogs,” he hopes the attention they’re getting from their “godmothers,” the Franciscan Apostolic Sisters who are his housekeepers, as well as the Servants of the Pierced Hearts of Jesus and Mary and the Missionaries of Charity will make them more social creatures.

“They get a lot of play time,” Bishop Jenky said.

Many evenings find Vicar and Monsignor tucked up under the bishop’s chin, one in each hand, sleeping — and sometimes he joins them.

“I’ve always loved dogs,” the bishop said. “I’m happy to have them.”