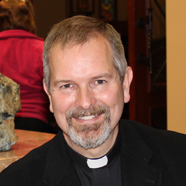 NORMAL — Msgr. Eric Powell led the celebration for Epiphany School when it was designated a Blue Ribbon School by the U.S. Department of Education in 2011. Now the school and parish are cheering for their pastor, who has been chosen to receive the National Catholic Educational Association’s Distinguished Pastor Award.

Established in 2007 and given to just one pastor in each of the NCEA’s 12 regions, the award will be presented to Msgr. Powell at the organization’s convention in Houston this April.

He is the second diocesan priest to be recognized in as many years — Father Ric Schneider, OFM, longtime pastor of St. Mary’s Parish and School in Bloomington, was honored last year.

“I believe that Msgr. Powell is a very worthy recipient of this award,” said Dr. Sharon Weiss, superintendent of Catholic schools for the Diocese of Peoria.

“He has done a tremendous amount of work to ensure that Epiphany School is first class in faith formation and academics. The fact that they were a Blue Ribbon School shows that commitment,” she said.

She added that school leadership requires the involvement of the pastor to be successful and said, “There is wonderful pastoral support in Msgr. Eric Powell.”

“Recently I was chatting with some parents and said that we, the staff, have always got to work to ensure that any visitor — and every parent and child of Epiphany School — senses a warm, family feel here on our premises,” Msgr. Powell told The Catholic Post. “I really do want our alumni and parents to remember these years with happiness and contentment.”

Acknowledging that no one is perfect and tensions surface from time to time, Msgr. Powell said that as a Catholic school Epiphany is also a school of Christian discipleship “where all of us are called to deal with problems and allow for reconciliation and new beginnings.”

CREDIBLE, APPROACHABLE
Ordained in 1990, Msgr. Powell’s first assignment was as chaplain and religion teacher at Marquette High School in Ottawa. He has ministered as a pastor and administrative assistant to Bishop John J. Myers, served at the Congregation for Eastern Churches at the Vatican, and worked in the Marriage Tribunal of the Diocese of Peoria since then, but said it has been a joy returning to the classroom at Epiphany School.

“You get firsthand contact with kids and their problems and priorities in adolescence — things that older folks tend to forget,” according to Msgr. Powell, who has been pastor at Epiphany since 2002 and team teaches junior high religion. “That impacts what you try to teach and why.”

His prime directive is “not to get lost in the transfer of information, but to try to surface the person of Christ.”

Striving to be “credible, kind and approachable” in and out of the classroom, Msgr. Powell said, “Success for me is when a student approaches with their guard down and speaks openly and freely. Upon that rapport, I can truly catechize.”