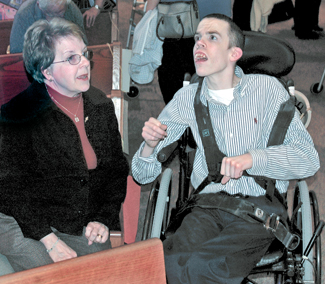 Photo Caption: David Conrad, shown with his mother Kathy, made his first Communion last Wednesday during Special Persons Encounter Christ’s final Mass of the school year at Christ the King Church in Moline.

MOLINE — Songs, laughter and joy filled Christ the King Church during the concluding Mass of Special Persons Encounter Christ’s school year last Wednesday, but perhaps the greatest joy could be read on the face of Kathy Conrad, whose son David made his first Communion.

“It’s fabulous,” Kathy Conrad told The Catholic Post. “It’s been a long time coming, and it’s been an answer to so many prayers.”

David, 23, is one of about 100 men and women with special needs who take part in religious education classes and worship through SPEC. Classes are held Wednesday nights from October through April in the Believers Together Center at Christ the King Church in Moline.

David, 23, and his parents, Kathy and Tom Conrad, are members of Our Lady of Guadalupe Parish in Silvis.

Kathy, who serves as SPEC board secretary, said David’s first Communion would never have happened without the love and dedication of Sharon Dodd, director of religious education at Christ the King Parish and SPEC co-coordinator.

“She made this happen for us,” Conrad said.

The Conrads formerly lived near Chicago, but they were not able to find religious education classes suited to David’s needs in that area. David has cerebral palsy.

“We tried to get him into CCD classes for special needs children, but those classes were for higher functioning children,” Conrad said.

She continued, “They wanted him to have some cognizance of what the church understands about the Eucharist. But he’s never going to do that. It’s important for him that he should receive all the sacraments of the church that everyone else receives.”

“The miracle of miracles is that (David) is sitting up in front and he’s paying attention to what the Mass is doing,” she said.

David’s mother did not immediately find out about SPEC after settling in the Quad Cities area. She met Dodd in a book club, and during a conversation Dodd told her about SPEC and encouraged her to enroll David in the program.

“God presented us with a special gift. He doesn’t give everyone a special needs child,” said Conrad.

“It’s been hard, and I’ve gotten angry,” she said. She has often asked God why he handed them the great challenge of raising a child with cerebral palsy. “Sometimes I say, ‘Why don’t you heal him?’ But then I think, ‘Then he wouldn’t be David.'”

Even more, Conrad said, through prayer and trust in God, she has received the graces of acceptance of God’s will and gratitude for his love.

David received the sacrament from Father Jerry Pilon, pastor of St. Mary’s Parish, Moline, who was celebrant of the Mass. In his homily, Father Pilon talked about what motivated the disciples to gather in Jerusalem every day and wait for the coming of the Holy Spirit.

“They had a single purpose in mind — they were thinking about being with God,” said Father Pilon. “They understood very well that the purpose of this life is to prepare for heaven.”

“The apostles came together because they recognized how special it was to be a child of God,” he said, adding that the Mass that night was “a chance to remind ourselves that we’re children of God, to help each other be closer to God.”

During the procession at the preparation of the gifts, SPEC class members in the “Purple Group” brought forward a colorful banner they had made. The banner displayed the footprints and names of each Purple Group member, and their footprints represented following Christ.

Also carried up to the altar were the SPEC banner and a picture of Jesus, a reminder that everyone is made in God’s image.

When the Mass ended, those present again joined in singing songs, including, “I just thank you, God, for making me me.” Those who had birthdays in April were asked to stand, and they were serenaded with “Happy Birthday” and “May the blessing of the Lord be upon you.”

Dodd also announced that Sister Cecile Baer, OSB, who helped start the SPEC program 31 years ago, is retiring this year from the SPEC board, of which she has been a member for the past six years.

The evening also was the occasion for the presentation of scholarships to seven high school seniors who served as SPEC volunteers. The scholarships were presented before Mass by Ruth Klouda, a SPEC board member and chair of the board’s scholarship committee.

This year’s recipients are Nick Goodknight, Brad McGuire, Mark Thomas, Gerard Trujillo, Kelsey Berg, Ann Tracy and Tom Naert. All are students at Alleman High School, Rock Island, except for Thomas, who is a student at Moline High School.

“The kids were all terrific. It’s a great group of students who applied,” Klouda said. “This program wouldn’t be possible without all of our teenage volunteers.”

The scholarship recipients “are all in National Honor Society, they all have jobs. How they have time for SPEC and still keep their grades up is just beyond me,” she said.

“We all know how cruel teenagers can be, and how they can make fun of those who are even a little different. But these teens start in eighth grade with SPEC and many of them continue on through high school, and they learn tolerance and respect for those who are different and who are less abled,” Klouda said.