Lose a loved one in the past year? Submit photo for our All Souls Day tribute video 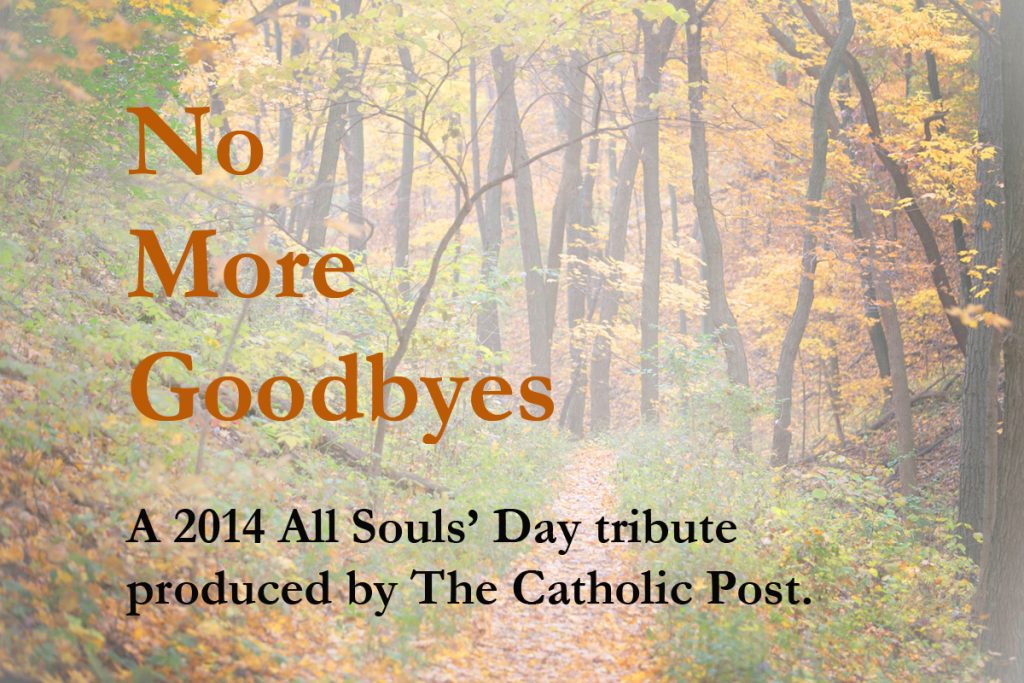 The Catholic Post is once again planning to produce a music video to honor those from the Diocese of Peoria who have died within the last 12 months and to promote prayers for them. The video will be released near All Souls’ Day, Nov. 2. An example of a previous year’s video has been placed […]

Knights of Columbus to change fourth-degree uniform: What do you think?

At left, members of a Knights of Columbus fourth degree honor guard in full traditional regalia are pictured during a recent procession at St. Mary’s Cathedral in Peoria. At right are the new uniforms shown Aug. 1 during during the international fraternal organization's 135th annual Supreme Convention in St. Louis. (The Catholic Post/Tom Dermody and CNS/Knights of Columbus) 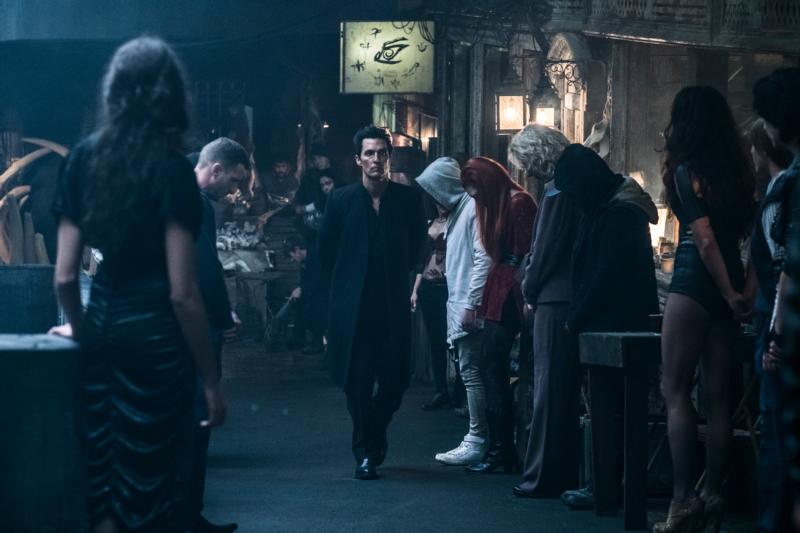 Matthew McConaughey stars in a scene from the movie "The Dark Tower." The Catholic News Service classification is A-III -- adults. (CNS/Sony)

By Catholic News Service Dull sci-fi fantasy in which a psychic teen (Tom Taylor) first dreams about, then travels to a distant world where he gets caught up in the cosmic battle between a villainous wizard (Matthew McConaughey) and the lone remaining member (Idris Elba) of a group of Old West-style gunmen still resisting him. […] 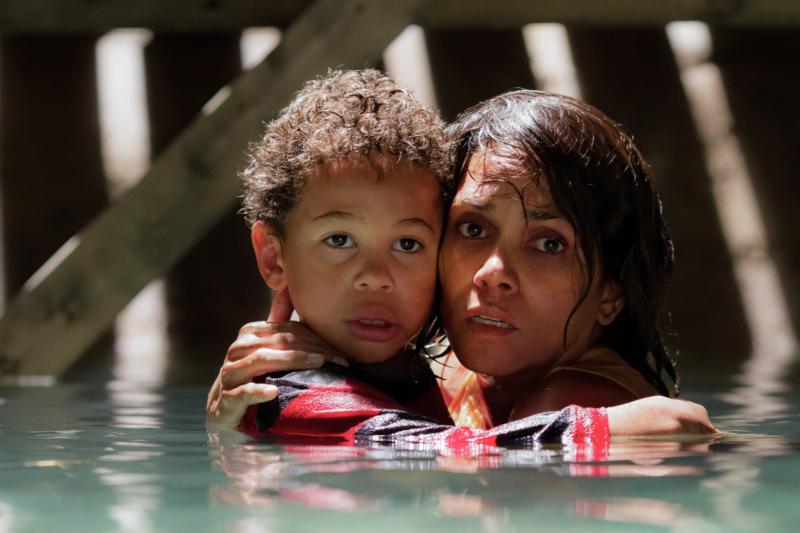 Sage Correa and Halle Berry star in a scene from the movie "Kidnap." The Catholic News Service classification is A-III -- adults. (CNS/Aviron Pictures)

By Catholic News Service This compact thriller is less a story about a mother’s (Halle Berry) enduring love and sacrifice for her abducted young son (Sage Correa) than a long drive in an amazingly durable minivan. Director Luis Prieto and screenwriter Knate Lee have no interest in character development and motivation. Berry merely reverts to […] 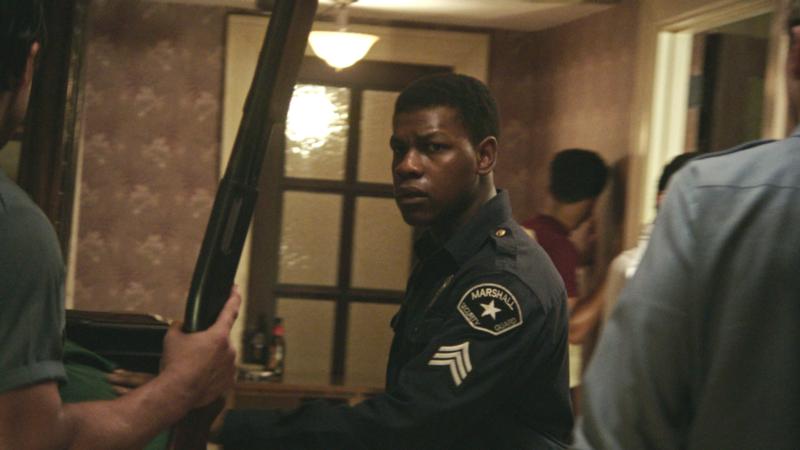 By Catholic News Service A dark chapter of the Motor City’s history is revisited in this searing period drama about the so-called “12th Street Riot” during the summer of 1967. Director Kathryn Bigelow focuses on the notorious police raid of the Algiers Motel which resulted in the death of three unarmed black men and the […]

Bishop Daniel R. Jenky, CSC, kisses the National Touring Relic of St. John Paul II during its last visit to the Diocese of Peoria in 2013. The relic, a vial of the late pope's blood, is being brought to the diocese again Aug. 16-20 with veneration opportunities in Silvis, Havana, Champaign, Bloomington, and Peoria. (The Catholic Post file photo/Daniel Sone)

Catholics of the Diocese of Peoria will have the opportunity to celebrate Mass and venerate the National Touring Relic of St. John Paul II when it is brought to several sites in mid-August. The relic, a vial of the late pope’s blood, is entrusted to the Servants of the Pierced Hearts of Jesus and Mary. […]

‘Joy of the Lord’ strengthens 220 at Catholic Charismatic Renewal event 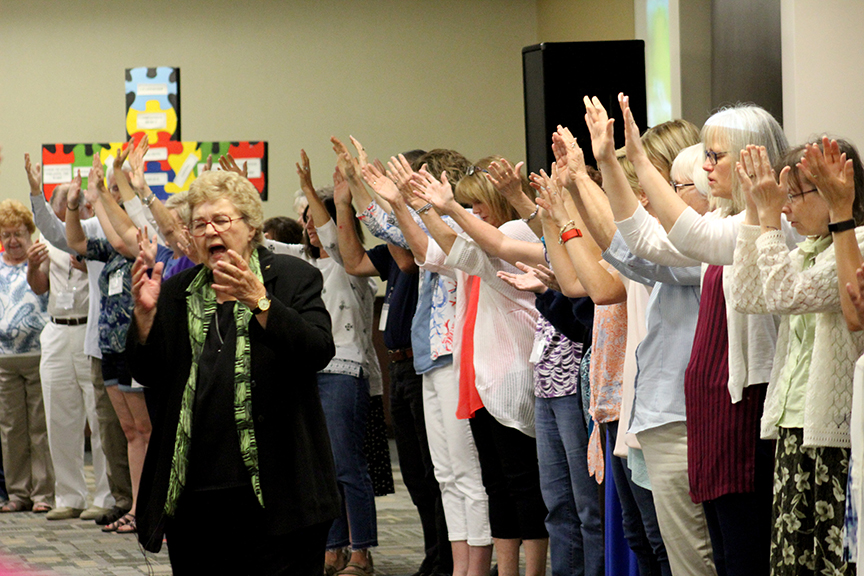 Sister Linda Koontz, SNJM, a keynote speaker for the 31st annual Catholic Charismatic Renewal Conference on July 29, encourages people not to be shy in opening their mouths to praise Jesus and seeking his help as she prays. (The Catholic Post/Jennifer Willems)

People filled with the Holy Spirit should not walk around like “sad sacks,” but rather put on their “garment of praise” and let everyone know the cause of their joy — Jesus Christ. That is exactly what 220 people did during the 31st annual Catholic Charismatic Renewal Conference, which was held July 29 at the […] 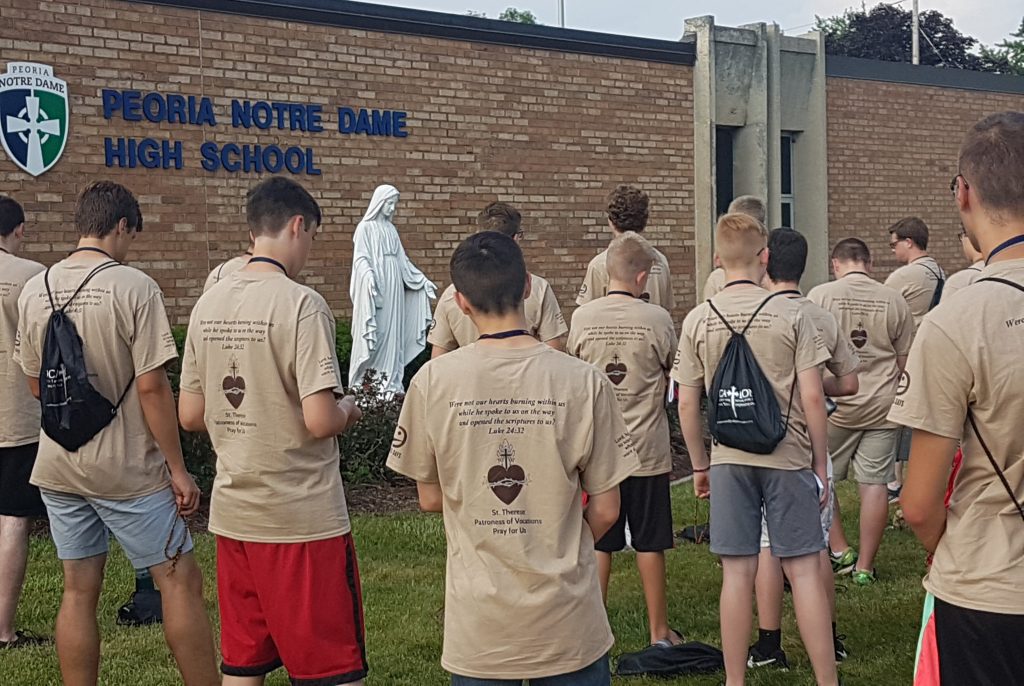 High school freshmen and sophomores from around the diocese pray the rosary during Session III of Emmaus Days at Peoria Notre Dame High School. This was the first year Notre Dame hosted two sessions of the vocation awareness summer retreats. (Provided photo)

More than 130 boys and young men were challenged to seek Christ and His plan for their lives during four Emmaus Days vocation awareness retreats this summer sponsored by the diocesan Office of Priestly Vocations. While the first two sessions for college-aged men and juniors and seniors in high school took place at Nazareth House […]