UTICA — Msgr. James Swaner, a Charlie Brown fan and collector, won’t have to say goodbye when he ends his 13 years as pastor of St. Mary Parish here by transitioning to senior status on June 8 after 55 years of active priesthood.

He’s simply moving across the street. 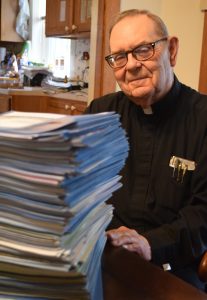 Msgr. Swaner poses with a stack of bulletins from his 13 years as pastor of St. Mary Parish in Utica. He has written a weekly bulletin column for the past 34 years. (The Catholic Post/Tom Dermody)

“It had been for sale for about seven or eight months,” said Msgr. Swaner of the white, frame house directly across Division Street from the St. Mary rectory. “I woke up one morning and said to myself, ‘God must be telling me something,’ so I put in an offer and they accepted it.”

And so the long relationship between the 80-year-old priest and LaSalle County continues. All but 10 of Msgr. Swaner’s years of priestly service have been in LaSalle County — including periods as teacher and principal of Marquette High School in Ottawa; parochial vicar at  St. Columba, Ottawa; and as pastor of faith communities in Eagle Township, Kangley, Leonore, LaSalle (Resurrection), Dimmick, Wenona, Lostant and Utica.

“I’ve got them married and buried all over this county,” he told The Catholic Post in a May 10 interview. His only assignment outside the region was as pastor of St. Patrick Parish, Washington, from 1994 to 2003, including a brief time as administrator of St. Luke, Eureka.

The many who have benefited from Msgr. Swaner’s priesthood are invited to say “hello” and “thank you” during events in Utica on Sunday, May 29, beginning with 10 a.m. Mass at St. Mary Church. A celebration of his ordination jubilee and retirement will follow at an open house at the Utica Knights of Columbus Hall from noon to 3 p.m. Light refreshments will be served.

“NOTHING EVER HAPPENS BY CHANCE”

Born in Chicago and raised in Berwyn, Msgr. Swaner spent much of his childhood around St. Odilo’s Church, where he attended the parish elementary school and was an altar server. His mother worked part time at the rectory and his father helped cut grass on parish property and cleaned the church.

His high school studies were at Quigley Preparatory Seminary in Chicago. He then attended St. Mary of the Lake Seminary in Mundelein for two years until a “shoestring uncle” — a family friend, Father Bill Kwinn, who was pastor of St. Anne Parish in Spring Valley — convinced him to consider studying for the Diocese of Peoria.

“He finally wore me down,” recalled Msgr. Swaner. “And Peoria adopted me.”

He completed his studies for the priesthood at St. Paul Seminary in St. Paul, Minnesota, and was ordained by Bishop John B. Franz on May 28, 1961.

He was assigned to St. Columba Parish in Ottawa with teaching duties (Latin and social studies) at Marquette High School. When the Sisters of Mercy were on the verge of withdrawing from the school, Msgr. Swaner began taking night classes and summer courses at Loyola University in Chicago. He was named principal of Marquette in 1969, and served for two years until he was hospitalized with what was later diagnosed as a heart attack at age 36.

One of Msgr. Swaner’s life mottos is “Nothing ever happens by chance” — he repeated it at least a half-dozen times as he recalled his experiences during the recent interview in his rectory — and the hospitalization led to his reassignment at the rural parishes of Annunciation in Eagle Township and St. Mary, Kangley, in 1973. Four years later, he took on additional duties at Sts. Peter and Paul, Leonore.

He would be a pastor for the rest of his priestly career, but he found a way for his teaching gifts to be put to use as well.

“For the last 34 years I’ve been writing a weekly column for the bulletin,” he said, displaying a stack of bulletins from the last 13 years at St. Mary’s that rose nearly two-feet high off a table. “I’ve written about everything under the sun,” he said, from answering parishioners’ questions about the faith to series of columns on topics ranging from annulments, to the Holy Land, and his own vocation story. Whether the topic was profound or lighthearted, the goal was always to teach in ways all parishioners could understand.

Writing for the April 17 bulletin, Msgr. Swaner estimated he has written 1,600 such columns, starting in December of 1984, his first days at Resurrection Parish in LaSalle.

“These columns have helped me grow and continue to study and learn about my faith,” he wrote. “Please, never stop growing or studying your faith,” he pleaded.

In recent years, Msgr. Swaner has found new joy in teaching religion part time at Holy Family School in Oglesby. Last month he presided at confirmation ceremonies at that parish, managing to even weave a few Charlie Brown stories into his homily.

Msgr. Swaner was slowed by a second heart attack two years ago. He now goes for regular physical therapy in Peru.

“I think 80 is the time” to step down, he said, though he hopes to continue to teach in Oglesby. A car enthusiast, he also will tinker with his hobby car — a 2002 Ford Focus station wagon — as well as do some gardening.

The choice to reside in Utica was a natural one for the history buff. St. Mary’s is the oldest parish in the diocese, tracing its roots to a 1675 visit to the area by Father Jacques Marquette, SJ. A large Marquette memorial stands on the parish grounds. In addition, his parents and a sister are buried in nearby Ottawa. The St. Mary Parish religious education center has been named in his honor.

“It’s been an interesting 55 years,” he told The Catholic Post, including overseeing improvement projects at various parishes, service as vicar of the Pekin vicariate, and guiding the Utica parish after the tragic 2004 tornado that ripped through the community, leaving eight dead and damaging the century-old church.

To those considering following in his footsteps, he said “if you’ve got the slightest inkling God may be calling you to the priesthood, do it. Try the seminary. God will let you know.”

And whatever happens, he assures, it won’t be by chance.