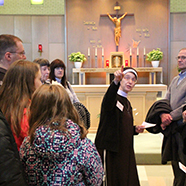 Photo Caption: Sister M. Theresa Ann Brazeau, OSF, points out the religious features in the chapel of the East Peoria motherhouse of The Sisters of the Third Order of St. Francis.

EAST PEORIA — Curiosity may have brought people to their door, but The Sisters of the Third Order of St. Francis hope the visitors to their motherhouse got much more than answers to questions during an open house on Feb. 15.

“What we really wanted as Sisters was for them to come and in some way experience Jesus. We prayed that that would be our greatest gift to them,” said Sister Judith Ann Duvall, OSF, major superior of the community. “If they experienced the joy that we experience maybe that can be a steppingstone to him for them. That’s what the pope wanted it to be.”

Communities of consecrated men and women around the country opened their doors on Feb. 8, but the East Peoria Franciscans delayed because they were on retreat. Two of the communities in central Illinois that had events that day were the Community of St. John in Princeville and the Daughters of St. Francis of Assisi in Lacon.

Sister Judith Ann said they had no idea how many people might come, so they prepared enough handouts and refreshments for between 200 and 400. There were 50 people in the lobby of the motherhouse 20 minutes before the open house was scheduled to begin and it’s estimated that more than 500 people walked through the door before it ended three hours later.

What warmed her heart was the number of people — about 85 percent — who had never been to the motherhouse before. “Well it’s about time we invited you,” she told them.

“GREATEST CARE AND LOVE”
While the Franciscans had hoped to keep each tour group to about 12 people, sheer numbers made it necessary to increase the size of the groups to 20 or 25. The tour took more than two hours.

Starting in Sister Judith Ann’s office just off the lobby, visitors were taken to the library, chapels, conference room, dining areas, the heritage room and infirmary, with Sisters waiting in each place to talk about their history, their work and what it means to live a consecrated life.

“My role as major superior is really to be of service to my Sisters and encourage and strengthen them as they give their life to God and then make that gift to God alive and real by spending their lives in service of others in our health care apostolate,” Sister Judith Ann explained to one group. “We come to give our lives to him, but we make it real by giving our life to others.”

The motherhouse is also the home of the senior Sisters who are no longer able to work in that apostolate. “We’re so blessed to have the facilities and capability of keeping them right here with us and caring for them ourselves,” she said.

In addition to being a place of ministry, prayer and retreat, the motherhouse is a place of celebration, according to Sister Judith Ann. That includes observing jubilees of 25, 50, 60, 70 and even 75 years of consecrated life, as well as rejoicing when new Sisters make their vows.

In the library and history room, visitors found Sister Diane Marie McGrew, OSF, president of OSF Healthcare System, dressed as one of the pioneer Sisters who came to Peoria on Oct. 28, 1876. Invited to start a Catholic hospital to care for the poor, they accepted even though they didn’t have the money to build one.

When the six Sisters arrived, they went first to St. Joseph Church. Sister Diane Marie said Mother M. Frances Krasse went to the front of the church and prayed aloud, “God, I promise you we will never send away anyone that you send to us for care.”

“Turning to her Sisters, almost as if she had heard a response, she said, ‘The God who called us here will be the God who will always provide for us,'” Sister Diane Marie told the group. “This exchange of promises tells us what God asks of us and what God will always be for us, if we remain faithful.”

She said Mother Krasse’s legacy was expressed in her dying words: “Nurse the sick with the greatest care and love and then will God’s blessings be with you.”

BRINGING CHRIST TO OTHERS
The main chapel sits in the middle of the motherhouse complex because the Blessed Sacrament is the center of their lives, Sister M. Theresa Ann Brazeau, OSF, said as she pointed out features in the worship space. The nine windows in the wall behind the tabernacle, for example, represent the nine choirs of angels.

She noted that the Sisters are often called on to pray for special intentions and these are listed in the book at the doors of the chapel.

It was Bensing’s first time walking through the buildings her father designed 50 years ago. “I was a teenager and probably didn’t go to the dedication,” she said with a laugh.

Talking about their health care apostolate, which includes nine medical centers in Illinois and Michigan, Sister Agnes Joseph Williams, OSF, cautioned that you wouldn’t enter religious life because you want to work in a hospital.

People were sent out with cookies and a flyer with information on other events planned by The Sisters of the Third Order of St. Francis. Among them is an open house on Saturday, June 13, that will enable people to “roll up their sleeves and join us in doing some good works together,” Sister Judith Ann said.

Another open house will be held on Sunday, Sept. 13. This time people will be invited to join the Franciscans for prayer and “experience a little bit the consecrated life and more importantly the joy that comes from it,” she said.

“That’s a joy they can have, too,” Sister Judith Ann told The Post. “Even if they’re not a Religious, they can have that joy, too.”